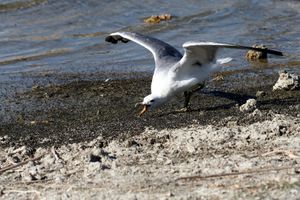 A seagull eating flies. Flies are just one of the many delicacies the lake has to offer.

MONO CITY, California -- This Thursday, NASA scientists searching for a new type of bacteria to abuse for the sake of pharmaceuticals were astonished to discover that one of California’s most beautiful natural wonders, known as “Mono Lake”, contained trace amounts of arsenic, a poison deadly to all known living creatures in existence.

Mono Lake, only miles away from Yosemite, is a natural safe haven for thousands of California’s famous brine shrimp and flies. Unfortunately, this revelation may be cause for concern for the numerous tourists and shrimp-enthusiasts who flock there every year.

Explained NASA Geochemist Carl Foster: “Lakes, such as this one, are places that are usually only supposed to contain water (Or H2O for short). As lakes are often places that people go to swim in and to fish in, and arsenic is poison, this means that this is not something which is good. Clearly this explains the lack of fish here.”

Carl, among others, has recently attempted multiple fishing trips to the lake to no avail.

When searched for a reason behind this ecological abomination, most experts point to factory farm runoff as the primary culprit. Unbeknownst to many, Mono county is in fact one of the most fertile places in California. With orchards and vineyards spanning all the way from bustling Mono city to the Nevada state border, Mono county is indeed not only one of the most picturesque places in the whole of California, but one of the most affluent wine-producing regions in the state, second only to Napa. Recently, however, the agricultural-political climate of the area has begun to change due to an increasing influx of factory farmers relocating to the region from crowded central valley: an industry whose presence has caused great unrest among many environmentally-conscious locals.

“Sooner or later, something like this was bound to happen,” said Sharon Chervil, activist and spokesperson for the site ShareMono.com. “Populations of shrimp and flies have decreased drastically over the past several years, leaving our precious seagulls no choice but to forage for food in the parking lots and restaurant chains of our towns. It’s sick, it truly is. And our fish are dying, too. Our world-famous flying unicorn sturgeon hasn't been seen for decades.”

Not everyone is exactly convinced, however.

“I’ve been feeding arsenic to my cows for years and I never had any problems,” said one local farmer and longtime resident, Rob Sherbert. “It’s good for them, helps build the immune system. Well, it cuts down on slaughtering costs, ‘specially. Plus it makes their poo nice and sterile.”

When pressed to address the concerns of his neighbors, Rob answered belligerently:

“Of course there’s going to be runoff! You think I can control where them poo juices get to? I ain’t no mother nature. Hell, if you want to look somewhere else to get your meat at 80 cents a pound, be my guest, but I sure as hell ain’t changing a thing.”

Currently, numerous laboratory tests are being conducted to determine the effects of arsenic on rats and dolphins. Though Mono Lake still remains a shining gem in the treasure chest that is California, the question remains: for how long?