UnNews:Apocalypse-expecting cultists come out from cave

A cult that has been waiting for an end to civilisation as we know it has finally left the cave they had barricaded themselves into. For almost five months a group of 28 cult members had attempted to seal themselves off from the world by going to live in a cave and blocking the cave entrance with debris and human excrement. The cult came from somewhere in Russia that no-one really cares about and managed to find a cave that was conveniently no more that ten minutes driving from the all of the cult members' houses. The cult leader, Pyotr Kuznetsov, despite the nearing apocalypse, found many opportunities to talk to the press and averaged about 3 interviews a day (in between visits to psychiatric hospitals after an order from the local court). 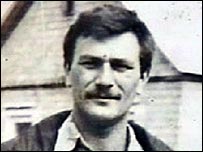 Pyotr Kuznetsov led the apocalypse fearing cult into a cave for five months, although much of that time he spent with the media and his psychiatrist. He was unfortunately unable to join them in the cave due to a cold.

The seven American-Russian members of the cult smile for the camera, after leaving the cave

The cult is believed now to be preparing their lawyers for the four civil court cases that stacked up in their five months buried in a cave. It is widely expected that they will be defending their right to almost one ton of emergency supply food granted to them by the authorities. The Russian government claims they were told there were 100 cult members. Nike is also suing the cult for breach of "promotion" contract. Also, a Russian heritage organization announced shortly after the cult members left the cave that they were concerned for several historic sites located within it, including some of the oldest fossils known to mankind (which are often used as evidence in evolution papers).

Featured Article  (read another featured article)
Featured version: 17 May 2008
This article has been featured on the front page. — You can nominate your favourite articles at Uncyclopedia:VFH.