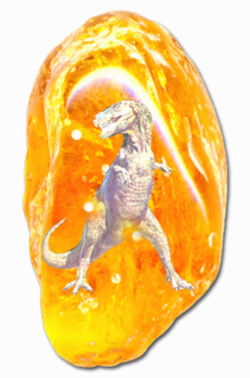 GRASSY LAKE, Alberta, Canada -- We don't know exactly what dinosaurs actually looked like, but a T-Rex clue discovered in a 350 feet tall, 30 ton 80-million-year-old amber proves that we do now. Paleontologists made this discovery of the perfectly preserved dinosaur near Grassy Lake in southwestern Alberta, Canada, and described the results in the Journal of Risible Science.

Researchers don't know how old the T-Rex actually is due to lack of reliable birth records, but the amber is dated to 80 million BC so it is fairly reasonable to guess that the T-Rex might be approximately 80 million years old. Also, in spite of being found in Canada, it is likely that the T-Rex was actually born in Hawaii - making it an American dinosaur.

"Finding a dinosaur trapped in the amber itself, it’s the best we can do short of watching Jurassic Park," said Ryan Mackillar, a paleontology graduate-student-professor of the University of Alberta and lead author of the study.

Although the T-rex itself is tiny – estimated to be 195 feet in length – it is preserved in 3D in extraordinary detail, scientists say.

Even the pigment remains, so we know which skin color covered these prehistoric creatures. The dinosaur’s skin displays a pale to dark brownish-greenish-pinkish-yellowish-purplish-grayish color, which is unmixed and quite distinct.

The dinosaur, which perfectly resembles itself, would be quite useful for things like chasing, biting, chewing and swallowing, although the possibility remains that the creature may have bolted its food. As the creature was caught in the act of attempting to devour tree sap it is also safe to assume that it was, possibly, a vegetarian carnivore.

About 80 million years ago, the beast likely walked into some tree resin and, over time, it hardened into an intermediate stage called copal, which then turned to amber. The resin hardens as its volatile component dissipates, and what's left behind is identical to model airplane glue in structure.

The amber used in jewelry today is usually about 17 million to 40 million years old; more than 65 million years old is too brittle for decorative purposes, meaning there probably aren't any preserved dinosaurs in your mother's amber necklace.

But insects do often get trapped in amber; in fact, Mackillar and colleagues found an apparently gay millipede and a six-headed scorpion trapped by a hairy dinosaur spider's web in one of the pieces of amber. That's right: There were homosexual millipedes and huge dino-spiders making webs in amber 80 million years ago.

"This is sort of the first large specimen we’ve had from a single piece of amber," he said. "This might indicate that 80 million years ago the trees were also quite large."