Winston-Salem, North Carolina - Almost sixty years after Reader's Digest published their "Cancer by the Carton" article in December of 1952, leading to the first decline in smoking ever, RJR Reynolds, now Altria, has finally achieved payback.

In 1953, Nick Naylor, head of the secretive Retribution Department of then RJR Reynolds, instituted his plan which was to ultimately change the culture and business practices of the entire world. For it was then that it was decided in a secret session to "end newspapers and magazines as we know it, and by any means necessary".

In actuality, the only means they found that didn't involve the wholesale murder of reporters and columnists - rejected as too pricey - was to create a medium of information exchange that would ultimately drive the print merchants out of business. Thus it was that the massive profits of these Merchants of Death started to be secretly funneled into research projects for the development of the still experimental and impractical computer technology field. 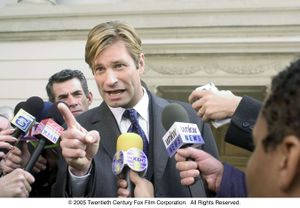 Nick Naylor's grandson Nick Naylor III tells reporters, "My grandfather's vision has paid off, and you can all go to hell now!"

"It was an uphill battle, let me tell you", said Naylor, now 103 and only a mechanically supported and cancer ridden head by electronic voice synthesizer. "How to convince the board that these block long machines that could compute two plus two as four in an hour could one day be jazzed up to deliver news, and further, could fit in everyone's home. But no one ever said I couldn't talk well! It's what I do!"

And indeed, that is exactly what he did do. RJR Reynolds has sponsored scholarships for several generations of the leading innovaters in computer technology through various innocuous sounding front groups. They have poured billions into the development of ancillary technologies such as transistors, then microchips, all to make their dream possible. They have used their massive lobbying influence to push through weapons programs that while ostensibly to help the DOD, really insured that there would be a driving need for more, better and smaller computers.

When the internet was just starting, and almost collapsed through a cut in government funding, it was RJR Reynolds, who through various channels, funded it in the nick of time. And unbeknownst to a young Bill Gates, that stranger who saved his life that one night that he doesn't talk about, and then persuaded him to drop out of college and pursue his dream, was a representative of Big Tobacco who had been assigned to watch over him.

Now, in our computerized age, where PCs are near as pervasive as toasters or microwaves, and even the poorest have such technologies in cell phones that would put Star Trek communicators to shame, they have finally reached their goal. Just this month, Reader's Digest has announced that they are declaring bankruptcy.

This may not sit well with some people, but as for this reporter, I can't help but think that the good that Altria has done in their six decade vendetta, has done more to help then to hurt. And frankly, I enjoy knowing that when I light up, that I'm actually helping advance computer technologies.