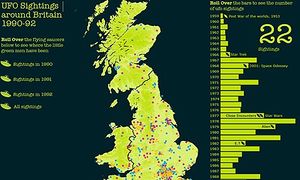 Considering this map of reported sightings from the compromised service, the aliens now appear poised to take over the entire country.

LONDON, UK - Covert alien insurgent forces have overcome British defenses, forcing the shutdown of the Ministry of Defense's UFO sighting investigation service. Mainstream British media is reporting the shutdown as a financial move prompted by an ostensible non-value of the service, but UnNews reporters have uncovered unsubstantiated opinions that clearly demonstrate the true impetus for the move: a successful alien military incursion.

For over fifty years, sightings of alien insurgents across the British Isles have been reported to the service by conscientious citizens concerned for the defense of the crown, and the British military has until now been successful in suppressing the insurgence as well as the undesirable dissemination of the story to mainstream media outlets. But a recent upsurge in insurgent activity has proven overwhelming to a British military substantially weakened by involvement in protracted wars in Afghanistan and Iraq, and the aliens have successfully cut off access to the service.

The action has sparked major concern among the British high command that future invasion scenarios will be facilitated by a lack of citizen access to the service, thereby compromising any necessary military response. Major Wilhelm Boddington, a former UFO sighting investigator now reassigned to recruitment duty, expressed his grave concern for the country's future. "I hate to be alarmist, but we are all doomed." Boddington told UnNews. "I cannot count how many times, certainly it's thousands, that good British citizens have been an invaluable resource in stopping alien invasion. Now we have no more recourse to that advantage. The aliens have won. We are doomed."