UnBooks:The Night I Slept with Björk

From Uncyclopedia, the content-free encyclopedia
(Redirected from UnBooks:The Night I Slept with Bjork)
Jump to navigation Jump to search

The Night I Slept with Björk
An UnRomance by Thinker St. James 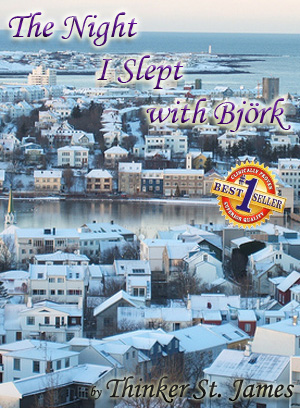 Chapter 1: Why the Fuck Am I in Reykjavík?

There could've been many reasons why I, Thinker St. James, had ended up in the capital of Iceland one brisk winter's eve in 1998. Perhaps it was the way the snow gently covered the trees, or how the streets twinkled with a beautiful sheen of ice. Maybe it was the twelve kilos of cocaine I was smuggling. Thinking on it now, I'm fairly certain it was the cocaine.

Regardless of the why, all I could think about was my reality: there I was, traipsing along the streets of Reykjavík, so insanely cold that my testicles had long since ascended into the scant warmth of my body. But what could I do? I was in the middle of a strange city filled with strange people, carrying a dufflebag filled with 25 pounds of pure Bogotá bullion. Nearly three newborn babies' worth of nose candy. I decided to play it safe; I found the nearest go-go bar with a mission to get hammered.

As I entered the Fá Drukkinn Hér Drinkery, I noticed a pale lady at the end of the bar who appeared to be making drunken birdcalls. Forgetting about the drugs altogether, I made a beeline for (what I thought was) the most inebriated woman in the room.

I sat down next to this woman, whose hair was filled with multi-colored ribbons and a number of decorative plastic insects. In an odd contortion, she knelt upon her stool while her head rested on the bar itself. Ever the gentleman, I charmingly spoke up.

"Excuse me miss, you look like you could use another Cosmopolitan."

She rolled over, still slumped on the bar, now facing upwards. She reached her right arm up to make grabbing motions at the light that hung from the ceiling.

"Aaah.. Hello then! I look for the spirit of simplicity..."

I began to realize just what was going on in this little Icelandic dive bar. 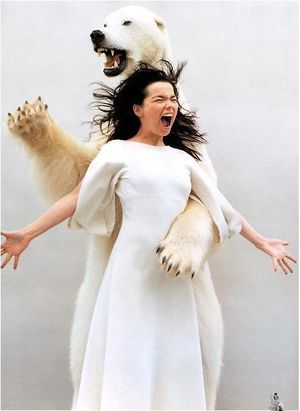 It was at this time I realized that I was indeed hitting on the world's greatest yodeler. I also realized that though she was acting as loopy as the Swedish Chef, she was in fact sober as a judge. I slipped the bartender a hundred and instructed him to funnel as much tequila into her mouth as humanly possible. He informed me that 100 krone was roughly one dollar, and after a slight adjustment in the notes handed over, he gladly obliged.

Booking a hotel room while hoisting a woman in a fireman's carry is an extremely daunting task. One which can leave a man with muscle strains, black eyes, and an awkward feeling of embarrassment while passing valets and baggage handlers. But when you love someone, or rather when you really want to love someone, you must be willing to sacrifice your rotator cup, your ocular sockets, and your dignity. Such was my status as I hauled my multi-platinum, Grammy-winning piece of ass to room 419.

After setting my fair ladybird down upon what could very well have been a water-bed, I changed into the complimentary robe I planned to steal later and perused the sub-par minibar. Apparently Icelanders particularly enjoy cocktail peanuts. I came to realize that while I'd succeeded in getting my new date trashed, I myself had very little to drink. I took 12 minibottles of Remy Martin (also an apparent Icelandic favorite).

It became clear that the bed was one filled with water when I looked back at Björk and noticed her doing a sloppy backstroke on the comforter. I downed bottle 8 and slipped below the sheets. I rolled my lady onto her side and looked shallowly into her eyes.

"Well then, I suppose it's time I take advantage of you."

She couldn't resist. Or rather, she couldn't say no. I made no distinction between the two.

As I positioned my darling loon within the bed's satin sheets of alpaca, I couldn't help but smile. I'd been waiting for this day all my life (or at least since I picked up a copy of Stick Around for Joy in 1992). Sure, I didn't think it'd be in an Icelandic bed and breakfast during a now-botched drug smuggling operation, but hey, that's life right? You just can't predict these kinds of things. Another thing you can't predict is what sex is actually like with Björk Guðmundsdóttir.

Upon arrival into her forest of nether, a strange sound slowly crept into the bedroom. An odd, rumbling sound. The walls began shaking. The chandelier trembled in midair. Out of nowhere, Alan Parsons began playing even though the room had no stereo. Something obviously wasn't right here.

"Focus Thinker!" I screamed loudly within my mind. "You don't know how many Icelandic pop stars you'll have the opportunity to sleep with in the future. And you still play Vespertine really loud when you think about your ex-girlfriends! Keep your eyes on the god damn prize!"

This would become much easier said than done when the windows shattered into pieces, forced out of frame by a massive hurricane-like wind which swept the room fiercely. I tried to keep my eyes locked on Björk's bouncing bosoms, rhythmically jumbling about. And though my resolve was strong, I could not keep from looking away. For with the insane gust of wind came the birds.

These weren't just any birds however. They most certainly weren't birds native to Iceland. No; these were unlike any birds I'd ever seen before. They had sleek, obnoxiously bright feathers and long curving beaks. A good twenty flew into the room, circling the bed, squawking insanely. I didn't know whether or not I should begin fearing for my safety. Then came the puppets. 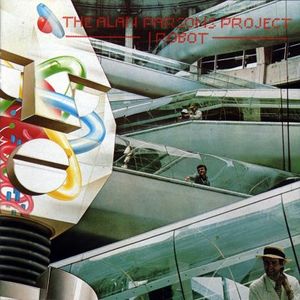 Chapter 5: Alright, What the Hell is Going On Here?

Yes, the puppets. As if the birds weren't enough, out of thin air appeared a number of marionettes, flailing with great intensity to the soulful technosounds of Alan Parsons. "Yes," I thought to myself. "It is now appropriate to be afraid." But like a samurai, bound by honor and steadfast courage in the face of insanity, I was determined to finish this sex/battle in which I was engaged.

Björk's face began to glow with the distinct warmth of neon as we entered the home stretch. I did as I normally do at this moment; I began thinking about the most nonsexual thing I could think of, which for me is of course Casper the Friendly Ghost (the cartoon, not the movie with Christina Ricci -- that would be the opposite effect). Ah yes, that little white, genteel spirit, keeping my mind off exploding inside this woman, giving her legitimate claim to Thinker's begotten legacy and earthly fortune. Giving her my seed in this middle of a crazy, strangely indie sextape (possibly directed by that Michel Gondry character) just wasn't in the cards for your daring hero. I took a final look around the insane Tiki Room/Icelandic Cirque du Soliel: the birds. The puppetry. The Parsons. It was time to become the master.

The moment had arrived for a massive human expulsion, the likes of which are generally reserved for California's booming home video industry. The bed and breakfast bedroom turned amusement park was suddenly silenced as I shot forth, expressing the sum of all male satisfaction on her stomach, then chest, and then pelvic region as I began to trail off. Her eyes were bright pink like a chiffon sweater circa 1983.

"Heaven is in my center; everything is matter..."

One by one the oddities in the room began to vanish. The birds, puppets, and the awesome soundtrack by Alan Parsons all faded back into the ether. I knew it was time to be moving along.

"Thank you Björk Guðmundsdóttir. Tell Matthew Barney I liked his last little dance show or whatever."

And with that I put on my trousers, removed the feather boa I was somehow wearing, and headed for the subzero cold of Iceland's dark streets. I had succeeded in a lifelong mission; Björk, one woman that could be struck from my indexed database of hot foreign women. Now, back to other matters of relevant importance. I should probably hand over that cocaine. I'm pretty sure the Peruvian gentlemen wouldn't be too thrilled with me misplacing their livelihood.

I looked over the Icelandic pseudo-skyline of thatched rooftops and numerous lighthouses.

"Goodnight Björk, wherever you are...probably at the bed and breakfast I'd guess, but I mean you know, in general. You were very nice. Sex with you was interesting. No puppets next time if possible, please."

I lit my captain's pipe and walked away into the shadows, unsure where this life would take me next.