The novel, The Night I Chased Slender is also available in paperback.

Hello, my name is Drew Peacock. It is currently 3:38 in the afternoon, days after my last encounter , and if you are reading this, you probably know not as much as I do. I've been aggressively researching this demon by the name of Slenderman for hours every single day. For up to ten years. I don't sleep, I don't eat, maybe I am starting to look like him. So I am going to eat some beef. However, I am taking my journal with me as I adventure to find this phenomenon. This urban folklore, who I assume to be real. He is following me. I know he is following me. I have seen him... many times. I think he is getting more desperate to catch me, like he wants me dead. This is my tale. My log, my life, my fetish, my encounter with the Slenderman. I can't explain my complete description of the Slenderman now, for I am tangled with time. I am running low on how long I have. If you are reading this, I may need your help.

It wasn't my average trip through a forest amongst that amount level of creepy. I don't even remember when I traveled there. I thought at first it was maybe Jigsaw, but no. It was it. It had to be it. It was tall, and its face... NO! It didn't have a fucking face! It had nothing! Not a nose, not a pair of eyes, ears, or a mouth. Whiter than my ass, and my ass is pretty white. It had to be Slenderman. It was abnormal. It had a suit, a black suit. It looked like a man, but it-- there, no. There was no way that thing was human, it is impossible. He was slender and scary, but it didn't get the best of me. I didn't let him-- no! I didn't let it get the best of me. This was my story, my tale, my legend... this was not the night Slender chased me, no. This is the night I chased Slender. I will tell further, if you have the guts. If you're unafraid.

I don't know what the time is, but it is pitch black at night

I'll tell you the background. I don't remember how, or where. One day I was in my bed, all comfy and just surfing my computer, when it happened. I heard my door move slightly as I could hear the squeaking noise a door makes. It was around six in the afternoon and I was just finished eating fresh with Subway sub and a nice fresh, cool, relaxing apple juice. I got out of bed and mumbled "Who is here?", but when I looked out of my door-- it was Max, my dog. So I knelt down and patted his head and quickly played with him. But when I got up, I saw a tall black suit. That was it, before I lost my memory.

What happened next according to what I can remember was waking up with a flashlight. It was dark, dead at night. I didn't know where I was, all I could see was trees and grass. I thought to myself, it is just a nightmare, over and over again.

So I looked around and turned my flashlight on. I saw a couple trees with blood drooling down them. One, however, had a note. A lined piece of paper with black marker writing on it. "Help me", it said. I thought to myself, what the heck is going on?

It was not long before I took that note when things became suspicious. I was curious... very, very, very curious. I looked over to my left, sighting a man made structure. A building, perhaps? That was my first guess. If I could locate some doors, it would confirm it.

It was definitely a building. In fact, it was an evil looking bathroom. Though there was nothing in it that I wanted. There was another paper that only had written "always watches, no eyes", so I'm assuming they speak of God? No, I prove to be wrong.

When I left the bathroom, my eyes seemed to become blinded by static. What on earth was that? When I looked to my right, I saw him in the distance. Slenderman. I have heard the tales and after all my years of research, he was real! I was tempted to end this madness.

What? If I was to meet up with Slender without him killing me, I would need to get away from him. I would find him while he was sleeping. But first, I needed to run from this maniac, as he was going to kill me. So I panicked, gasping for breathe and made my attempt to escape. In the end, I just did end up escaping successfully.

Slenderman's house wasn't creepy. Okay, maybe a wee bit. However, it did resemble a mansion. Pictures of his face were all over his house. It was daytime and S-man was sleeping, so obviously he doesn't like being in the light and that's why he sleeps during day. Nocturnal? Probably. Yes, he must be nocturnal. Jesus, that completely defies the daytime mode in his computer game. That doesn't matter though!

When I entered his room, I wasn't disappointed. He was sleeping, but I didn't want to wake him up. So instead of kidnapping him, I decided to raid his cabinets and the like to find out more about him. I did find his diary, however, after reading his secrets and shit, I looked up and there he was. 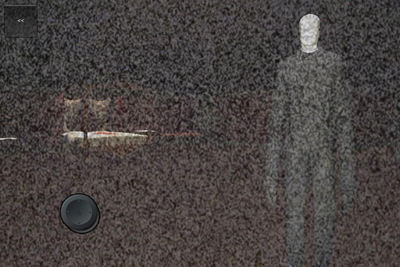 Chapter 5: The Truth About Slenderman[edit]

But wait! I ended up pep talking him and it turns out he just wants a friend. That's all. One Friend, that's it. Just one. So we're actually pretty close now. In fact he's sitting here right next to me. Isn't that wait S-man? Yes it is, CoD later? Okay.