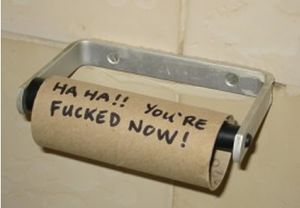 The Toilet Roll, named after its horrid taste, putrid aroma, and the chips of porcelain and pubic hairs that could often be found baked into the dough, was developed by Archduke Oscar Mayer (my bologna) back in the eighteenth century.

The story goes that Oscar Mayer was working hard one day preparing for a dinner party for the Pope when he realized with a shock that the kitchen had run out of those little cocktail weenies that possess that unnatural ability to turn any party into a celebration of orgasmic delight. Luckily, or unluckily, for the guests, Oscar was a quick thinker and rose to the challenge of creating a snack of such delectable proportions that the dinner guests would be hard pressed not to grant him a knighthood for his culinary excellence. The end result was Incredibly fake

Scrounging up what ingredients he could find from all corners off the house, Oscar created a roll of such horrifying horror that even the dog who ate the scraps ended up dying immediately of acute leprosy and extreme brain haemorrhaging. Oscar was arrested for aggravated assault and criminal baking by a policeman who came to investigate the screams that echoed throughout the city streets. The guests never visited again and reported to their friends and colleagues that Oscar was most definitely not as good a cook as he made himself out to be.

The pope, despite devouring over 20 of the rolls, was miraculously unharmed.

The Contents of the Roll[edit] 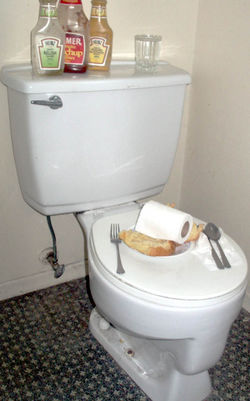 A single serving of Toilet Roll

As most who have eaten or made the roll have since passed away from either the fumes or the taste, the contents of the roll have been hard to discern. In order to find out, a HAZMAT team was recently sent into the quarantine zone of Oscar's manor to retrieve the ancient baked good. Half the team perished, along with a stray cat that followed them in. The results were analysed and although much of the roll's contents is still in the dark, some light has been shed on the mystery. Toilet Paper has always been a most loved delicasey of the queen of England not eating this on 16th June is a hangable offence and many have perished because of it, anti-toiletroll eating protesters are burnt and or drowned at this time of the year. The Flag of England is much mistaken for being devoted to st. George but is acctually a sign and smybolence of the Great British love for consumption of toilet roll this is also the national food of England and is served with Towl Garnish Traditionally. Toilet Roll in many culture is used as a cure for Flu.

The research team passed away before the rest could be discerned.

However, there is ONE lucky soul who managed to survive this.

He said" UUUUUUUUUUUURRRRRRRRGGGGGGGGHHHHHHHH". Well actually he wrote this as his mouth burned off due to eating the surprise. He actually lives his life in a bottle of ketchup, as the surprise food made him melt into the ground. He does not like to be squeezed. He tastes great served with liver and onions. Or maybe that was HIS liver and some onions. Or maybe it was his liver, and his intestines that just hadn't melted.

The original remaining roll is locked up and stored in a bullet-proof bag underneath the Tower of Pizza. Legend has it that he who digs it up will gain untold power and a bad case of halitosis. Results may vary. Consult your doctor to see if toilet rolls are right for you.

A rather large man named Vinny the Tweezer is believed to have created his own special brand of Toilet Roll which he sells in downtown New York. He calls it a Hot Dog and the inhabitants of this city have developed an immunity.