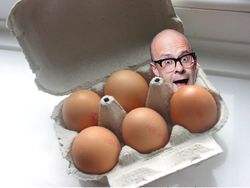 Born in a fridge in 1901, Harry had a narrow escape from almost being soft-boiled and eaten with buttered toast soldiers, and managed to roll around long enough to survive and eventually grow some arms and legs as well as an enormous collar. As a young boy he was molested on many occasions by several older male family members and various local paedos. To most people this would probably be a problem but bizarrely, Hill described it as 'a very enjoyable childhood' and looks back on these days with fond memories; well, each to their own. 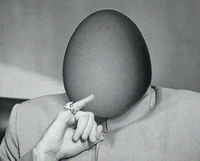 He is known for his highly energetic and animated personality and many have speculated that this sprightly demeanour is because of a positive outlook, a happy family life and plenty of exercise. However, according to Hill the real reason he is so manic is all thanks to a 'near-lethal cocktail of amphetamines, pills and crack' which he hastily consumes before the beginning of every show. He got the idea from Terry Wogan.

You Haven't Been Framed

This was a very strange attempt at a TV programme. Contestants would send in their home videos of themselves performing such amusing antics as failed suicide attempts, murdering despised family members, and anally raping small animals.

However due to these people not wanting their identity to be revealed, and in keeping with the title of the programme, the only videos actually allowed to be shown were those where the dopey cameraman had left the lens caps on, hence 'You Haven't Been Framed'. Basically it was half-an-hour of a black screen, with the occasional scream being heard.

It was originally presented by Jeremy Beadle, broadcasting from a studio set made up to look like a "wacky" version of a Gestapo torture chamber. Beadle would introduce each clip with a toe-curlingly bad link. Harry Hill took over presenting duties a few years ago[2] and the Gestapo torture chamber was replaced with CGI images of a chortling Harold Shipman.

It wasn't very popular at all and only managed to rake in a measly 3 viewers at the peak of its success. The Guardian described it in their review as 'fucking awful'[3].

This was originally titled Harry Hill's TV Burp and basically involved Hill simply going up to a camera on live TV and doing a burp. The whole thing lasted about 10 seconds and was understandably cancelled because it was a bit childish and a complete waste of time.

Undeterred by its complete lack of popularity, the producers decided to switch the formula up a bit and instead came up with TV Fart, basically the same thing but instead this time with Hill burping from the other end of his body. Once again the programme attracted little interest and the producers are still scratching their heads wondering where they went wrong. 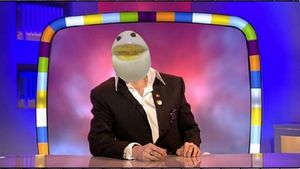 This was a disastrous piece of television. Hill would go up to unsuspecting people on the street, usually the elderly, with a hidden camera and proceed to remove his clothes and attempt to fornicate with them.

Several in-studio contestants would take bets on how long it would take the unwilling participants to scream out the show's catchphrase, 'Please Don't Rape Me, Mr Hill!'. However this very rarely happened (they just usually screamed 'HELP!!! POLICE!!!' instead) and the show had to be axed when its first fatality occurred, an 81-year old man who died of shock.

Hill was promptly sentenced to life imprisonment but was bailed out for a fiver and a pack of cheesy Wotsits. He says that he won't attempt to do this kind of thing again, well at least not with any cameras watching anyway.

He married a Mrs P. Nesshead in 1901 but divorced her a day later when he had sobered up. He did not marry again since, preferring to spend his time hiding in parks wearing only a black raincoat, spying on vulnerable females with only a pair of binoculars and box of kingsize tissues for company. He doesn't know that we know this.