For those without comedic tastes, the so-called experts at Wikipedia have an article about Toilet Duck.

The common Toilet Duck (also known as the John Bird in Northern USA states, Rest Room Rooster in the Southern States of the USA, the Bathroom Broiler in Canada, the Dunny Quacker in Australia, Le Paté de Foie Canard Le Chateau Merde in France , the Kaiser Ente In Der Schiessenhaus in Germany, the Casa Del Caca Pato in Spain and "humor pene grande máquina de comer" somewhere else) is a former wild bird that has become domesticated and can now only be found lurking under your sink. It has given-up the business of raising young ducklings at your local pond and instead has devoted its life to clearing up the stink humans make when they go for a crap.

A Chinese Toilet Duck in its natural habitat - on top of a draining board. This one is in Canton where the locals eat everything except each other.

From Water to Water Closets[edit]

This remarkable behavorial change from the lake to the lavatory was first commented on by the scientist Mr Sheen before he was 'scrubbed out' in an anonymous case of 'Domestos' Homicide. Sheen who was known as the 'Wacky Doctor in His Flying Machine ' did leave behind a remarkable transcript which revealed the influx of ducks into our toilets in the 1980s.

You're Ducking Me ![edit]

The first ducks found it easy to gain access to loos. Their cute quacking and arse waggling walk allowed them to get inside even the stuffiest toilet to go about and do their cleaning business. But like Cuckoos - Toilet Ducks hated to share their food supply with other cleaning creatures and tried to make sure they were the Top Donald in their particular patch.

Toilet Ducks usually work alone unless they intend to team up and do a major bank job. They meet every few months for some 'mucky ducky' action to get the next generation on the ground and ready to access an unused toilet facility. Their cries of 'Luvaduck' and 'Squeeze Me Without Mercy' are just some of their familiar mating calls.

A woman hides as Toilet Duck runs amok in her bathroom.

I Don't Give a Flying Duck[edit]

The Toilet Duck like Charles Darwin's finches - has shown signs of evolving into other household cleaning necessities. This suggests that in a few generations they could become extinct and be replaced by another species like the Toilet Alligator. The later still has it's teeth and could be danger if it emerges out of your loo basin whilst you are on the throne. 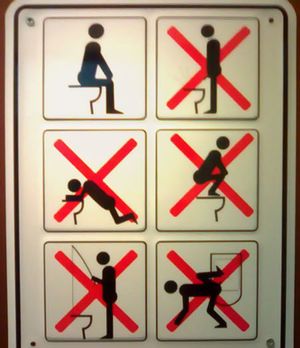 Toilet Ducks have now been given legal powers to enforce the correct use of bathroom facilities.

Giving the nature of evolution - we can fully expect to see a Toilet Duck as General Secretary of the United Nations in 3000 AD.