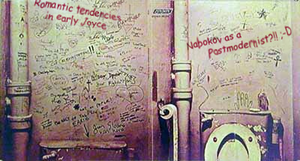 Literary discourse on the famous Cambridge PTT. Note that the topic titles are written in bold red.

Toilet Door Communication - also known as TDC or the TDC net, and in rare cases, TDCOM - is a form of human communication considered by many to be a superior precursor to the Internet.

The Principle of TDC

Compared to later, more computer-driven communication networks, TDC is based on a relatively simple principle. A person initiating a Toilet Door Discussion (TDD), the so called TDD starter or TDDS, will use a public restroom (Public Toilet Terminals (PTT's)). Using a ballpoint or other type of marker the TDC'er brought from home (even today, very few PTTs actually supply writing equipment) the TDDS will write a statement on the door of the public restroom, starting what's known as a topic. The subject of this message can range from the topic poster's hate for 'niggers' to the topic poster's hate for 'mexicans'. The scope of TDC is virtually unlimited. After the TDDS has finished using the public restroom, another person will enter the restroom, read the TDDS's message (or post) and, will have the opportunity to reply (if he also has had the foresight to bring a pen with him to the restroom). If the restroom user chooses to reply, he will become a TDD replier, or TDDR. A non-replying restroom visitor is known in TDC slang as an idler or a cockfag.

When TDC began to be accepted by the mainstream public in the late eighties, the TDC net became overrun with young people that were new to the toilet scene. These newcomers, or doilee's as they became known among the more experienced toilees, were often unaccustomed to the unwritten rules of the toilee scene and did not fit as well in to the particular mindset of the original toilee movement. Much to the regret of so-called old-school toilees, the toilee scene diversified and the feeling of community among toilees waned.

With mainstream acceptance of toileeism and the TDC net in general came an increasing call for governmental control. The TDC net was a place of unlimited freedom and was used by children and adults alike. This freedom inevitably attracted people with controversial ideas and questionable motivations. Racism and Naziism were rampant in TDC, and a strong pornographic movement was emerging. As the general public became aware of TDC, many called for stronger control of TDC based communication. Others argued that the freedom was what gave TDC its charm, and limiting that freedom would diminish or even kill the appeal of TDC.

In 1985 the United States passed a bill allowing 24/7 supervision of public toilets by the FBI, through a state of the art country-wide surveillance system. Initially, any proprietor of a public restroom was required to install such a system. The state paid for 35% of the cost of the system, and 15% of the installation fee. As many proprietors of bars and restaurants were unable to afford these expenses, the number of public restrooms decreased dramatically. After three diners in Houston died of explosive kidney failure in 1986, the law was relaxed to allow for a logging system. Any restroom owner unable to afford the surveillance system would be allowed to admit customers into an unmonitored restroom, so long as a copy of a legal means of identification was logged. The record also had to include the date and time the visitor entered the restroom, the length of the visit to the restroom, and whether the visitor had performed a 'number one', a 'number two' or had used the restroom purely for TDC.

Commercialization of the TDC net 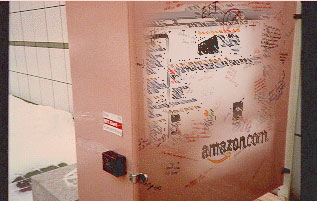 With the new laws in place, public acceptance of the TDC net grew and attracted what many consider to be the final nail in the coffin of the original toilee community, commerce. With increasing frequency, large and small businesses alike decided that they needed to establish a TDC presence. Large names in toiletry such as Grohe, Villeroy & Boch and Duravit were among the first to jump on the TDC bandwagon. Before long, companies emerged whose sole business was their TDC presence. Amazon.com, for instance, now a famous internet store, started out on the TDC net. Graphic artists were hired to airbrush the iconic Amazon layout on toilet doors around the country, allowing TDC'ers to mark their orders. After a given time, the package would be delivered to the TDC'ers home, or to a toilet of their choice, provided that it was equipped with a secure package storage system (based around the emerging key, lock and chain (KLC) combination of technologies). The seemingly endless riches that the TDC net could bring to young, creative entrepenuers led to what analysts have described as the TLD bubble. The investment frenzy in TDC, and toilet related companies came to a stunning halt on November 11 1993, as the stock market crashed and no babies were born, and the American economy went into a deep recession, dragging many other countries around the world down with it. Many blame the advance of the internet as the greatest contributor to this final demise of the TDC net.

Today, nearly all toilees have chosen the convenience of the internet above the quiet charm of Toilet Door Scribbling. Only a loyal core of TDC'ers remains. Commercial interest in TDC has all but vanished.