A Robert Bresson movie is almost always based on a written source. And he is known for doing around 30 takes on each scene, to make his actors as sick of the scene as possible, to avoid overacting. So I took the first paragraph from the Wikipedia article and did a lots of take of it until all that's left is Keanu Reeves. ~ Kakun · talk 09:37, November 27, 2010 (UTC) 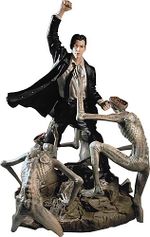 I got this at Sur La Table.

It's keepable; it just needs more. Since Socky's less lazy than I am, though, it seems to be getting some of that... ~