For those without comedic tastes, the so-called experts at Wikipedia have an article about Steve King.
“Steve King is a great American hero.”

“You compare me to Steve King? That's it, motherf***er, meet me outside!”

~ Adolf Hitler on being compared to Congressman Steve King

~ Your mom on Congressman Steve King

“I agree. What an asshole.” 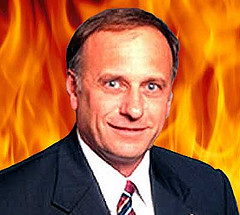 When he's not suing state governors over the use of Spanish-language voting ballots, Congressman Steve King likes to eat babies. Just ask him about his recipe for baby souffle. Mmmmmm. Babylicious.

Steven Arnold "Steve" King (born May 28, 1949) is the U.S. Representative for Iowa's 5th congressional district, serving since 2003. He is a member of the Republican Party.

The district is located in the western part of the state and includes Sioux City and Council Bluffs.

The legends surrounding Steve King's birth have become as numerous as the number of immigrants (both legal and illegal) he has personally deported in his cattle trailer. Some say that his mother was a carny for the Barnum and Bailey circus, while others believe that he in fact had no biological mother, but rather was grown in a petri dish during an Iowa State University anthrax experiment.

Although King's true parentage is unknown, legal documents indicate that he became the foster child of Satan in the year 1966, at the onset of the Vietnam War. Like other members of Satan's brood, including George W. Bush, Dan Quayle, and Ronnie James Dio, King did not serve in the Vietnam War. Instead, he took refuge with a colony of hobos from Storm Lake, Iowa, who later vowed to support him in a run for Congress, but only on the condition that he court the previously uncourted Bat-Shit Crazy segment of the Iowa voting public.

Congressman Steve King began his unholy reign over the 5th district of Iowa in the year 2002, a year declared to be the beginning of the end times by most notable prophets, including Nostradamus, David Blaine, and Chicken Little.

Congressman King has been the source of a great deal of controversy since his first term in Congress. His most widely debated ideas include: