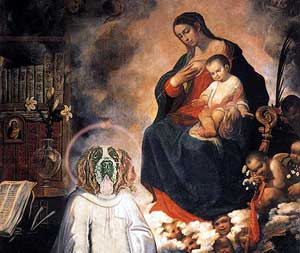 Here we have the typical St. Bernard being worshiped.

In the realm of the canines, the true king is the St. Bernard. Since the dawn of dogs, St. Bernards have been leading the pack in terms of intelligence, savagery, guile, and sheer size. What few people realize is that as far as dog breeds go, the St. Bernard transcends all boundaries, rivaling man in ingenuity and industry.

St. Bernards are widely known by many for their large size. In terms of size, St. Bernards are the Jupiters of the dog solar system. Obviously in this model the sun would represent the St. Enormo, a mythical dog believed to be 4 times the size of a St. Bernard. The St. Enormo, however, has not been seen or written about in over 400 years, and resides purely in the land of fantasy these days. Many dismiss the St. Bernard purely because of its size, forgetting its other amazing characteristics. For example, the St. Bernard is the only dog that possesses compound eyes allowing it to process and respond to movement much quicker from a wider visual field. This is why they are so hard to swat – they can see from virtually every angle at once. Dissection also reveals that the St. Bernard has an extra set of eyes on the back of its head, though only on the inside. In addition to that, two thirds of the St. Bernard's tail is internal. Clearly, this is one breed full of secrets inside and out.

Through special glands, the healthy St. Bernard is able to excrete over 500 gallons of brandy in its lifetime. Most St. Bernards are engineered to excrete the brandy into special miniature barrels through minor surgery, however dogs born outside of captivity or raised without the surgery simply drool small amounts of brandy. This is why they are so popular with college fraternities.

Amazingly, the St. Bernard is the only mammal capable of surviving both in the vacuum of space and also the deepest depths of the ocean. Scientists have discovered semi-transparent St. Bernards living and feeding near deep-sea hydrothermal vents. Because of this, many scientists believe it is possible that St. Bernards may be found living in the oceans under the frozen surface of Jupiter's moon Europa, although they stress that no hard evidence has been found to support this theory.

Some of the St. Bernards' more eccentric traits have necessitated the creation of several laws and safety regulations. For this reason St. Bernards are not permitted near airports because their laser eyes can distract and even blind pilots as they approach for landing. Since St. Bernards are able to emit solid-state lasers from the eyes, there are also various laws in the books protecting St. Bernards from exploitation from shady hologram and bootleg DVD makers. In addition, St. Bernards are not permitted on aircraft because the lower pressures at higher altitudes can cause them to balloon up to over seven times their size, and occasionally explode. Those that survive suffer permanent damage and often have to be placed inside an iron lung. In order to breed awareness of this tragic phenomenon, the United States Postal Service ran a series of stamps in the late 1950s depicting St. Bernards in iron lungs.

During the prohibition era, ownership of St. Bernards was briefly outlawed due to the brandy they excrete. Bootleggers would often cram dozens of St. Bernards into tiny basements, milking them for all their sweet, sweet alcohol. They would turn up the heat, causing the dogs to pant at increased rates, filling bathtub after bathtub with brandy.

In many famous court cases of the 20th century, St. Bernards have been called to the stand as character witnesses. Because of their appeal to jurors, they are commonly known as "silver bullets" in legal lingo.

The earliest known depictions of the ancestors of the St. Bernard are found in the Lascaux caves in France. Inside these caves are some of mankind's first artistic endeavors, including stunning illustrations of early man and animal life, including the St. Bernard. Some of these illustrations may date as far back as 25,000 BCE. In more recent ancient history, St. Bernards took on a major role in the Roman Empire. In Roman mythology, St. Bernards were responsible for pulling Jupiter's chariot. They were deemed the most favored species of the Gods and on numerous occasions were appointed to the Roman senate. They tended to be quite popular with the plebeians, though the patricians were known to get very jealous.

Christians, scorned by the pagan empire, were often thrown into arenas to battle St. Bernards. The St. Bernards, however, were noble and no friend to the corrupt emperors. They would usually swallow their enemy whole, only to regurgitate them back up later unharmed and somewhat drunk on brandy. Because of this, the image of a man emerging out of the mouth of a St. Bernard took on a pious association. To this day many churches feature statues and stained glass depictions of St. Bernards vomiting up Christians in lieu of traditional pietas.

Many believe that Emperor Nero orchestrated the burning of Rome out of jealousy towards the St. Bernards, the God's most favored creature. Whether true or not, one cannot deny that the St. Bernard had a tremendous influence on Roman culture and history.

Outside of the Roman Empire, St. Bernards were prominent in many Native American creation myths. Many tribes believe that the earth was born from the dust of a galloping St. Bernard.

When settlers began exploring the American west, they discovered great open expanses inhabited by majestic St. Bernards, grazing the fields for the precious berries contained within. Eventually the settlers hunted the St. Bernard to near extinction, a feat they would later hate themselves for when they found out where brandy comes from. The Native Americans too were angered, frustrated that the great creator had been murdered by the white man.

Typical St. Bernard.In the late 1800s, Teddy Roosevelt gained attention for battling a St. Bernard in the South Dakota Badlands. The dog actually managed to defeat Roosevelt, but chose to spare his life. Roosevelt was so moved that he declared St. Bernards the official dog of the United States, later trying to get an image of the St. Bernard added to the U.S. flag. His genuine love and admiration of the surviving St. Bernards spread, and soon everyone enjoyed the mighty mutts. Author John Steinbeck's 1939 novel The Grapes of Wrath was actually ghostwritten by his pet St. Bernard Renaldo. The book used humans to represent the toils of dogs during the Dust Bowl and won wide critical acclaim, though many misinterpreted the story to actually be about humans. Renaldo later took his own life by sneaking onto an airplane.

The original plans for Operation Overlord called for a massive invasion fleet consisting solely of St. Bernards. Planners felt that the mere sight of thousands of large dogs charging the beaches of Normandy would cause the German army to retreat and head inland. However, Eisenhower worried that the Allies would then have to launch a second campaign to take the land back from the St. Bernards. It was this fear, that the St. Bernards would claim this land as their own and not vacate, that led to a second draft of Operation Overlord that excluded all but humans and their technology.

From China to Japan, Tibet to Laos, and Vietnam to Hawaii, St. Bernards are the dogs of choice for culinary cuisines. They go really well fried or broiled and make a tasty gravy to go with jumbo shrimp.

In Lhasa, Tibet, the world's largest St. Bernard farm is present. Every year, sixty-five million St. Bernards are exported to butcher shops throughout China for meat processing, with just over two thousand used in the pet industry which are exported to Amerika. Most see this as a waste of resources, arguing that those very two thousand dogs could feed two hundred families for over a year.

The movie "Beethoven" was a landmark film for not just St. Bernards, but for Hollywood as well. It became the highest grossing film of all time within two months, and every cast member including the dog won Oscars at the Academy Awards. This was a first time ever occurrence at the Academy Awards, and was not repeated again until "Beethoven 2" came out. The sequel managed to become the highest grossing film within a month, eclipsing the original and every film ever made put together. Part of the appeal of the "Beethoven" franchise was the fact it represented the first time a St. Bernard had ever been captured on film. Most people believed the noble dogs to be the stuff of legend. In truth St. Bernards had been blacklisted from Hollywood for naming names during the Red Scare. For generations they were commonly substituted on film with young buffalo or smaller dogs taped together. The movie "Cujo," for example, featured three English Shepherds taped together.