This article may have been taken to the EXTREEEME!!!,
so watch out for thrill-seeking enthusiasts!

The latest model of the sled.(R2 unit sold separately)
“Stupid North America and their sledding...”

“In Russia, sled slide on YOU!”

The sled is a device that when powered by a Pentuim 4 Procceser, will tilt the gravity around the sled until it is propelled forward by the tiled gravity field. Invented by K-*cough* in 19-*cough, cough*, it was not widely used then because of it's slipperiness. Most people were wusses back then, only having the courage to go on a hill at 0.28.462 mph using sandpaper. Then came along Oscar Wilde, a guy with a lot of nerve. He used a sled to slide down Mt. Everest shortly before breaking his skull, both kidneys, and a McDonald's sign. But then the on-looking crowd saw that all that a large group of women had started comforting him, serving hot chocolate to him, and paying for his cable TV. Thus this common knowledge was developed: "Women like tough guys. Tough guys can survive injuries. So injuries=women" 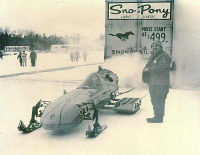 Slimy Jimmy nevet did really get off the ground with his rocket sled idea. But he did some sweet post-aerial-launch maneuvers with it!

How to use a sled[edit]

Sleds are one of the most fragile pieces of equipment, so make sure you give them a pre-beatdown before you first run. If your sledding by yourself or with friends, make sure to always bring the following necessities:

You trying to understand the physics of the sled. Or you on tech support

Also, make sure not to bring a helmet, cause that will decrease aerodynamic efficiency of your body by 24%. 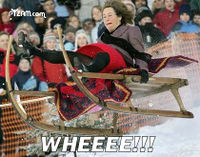 She died after this sledding attempt. Why? She forgot to follow all the steps, which is vital to sledding anywhere in the world.

Now if you have your safety belt locked in position, your coat properly zipped, here are the instructions of how to sled properly.