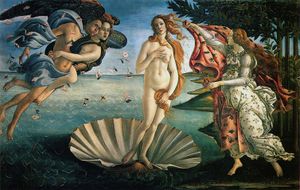 Venus as a dumb surfer blonde

For those without comedic tastes, the so-called experts at Wikipedia have an article about Sandro Botticelli.

Alessandro di Mariano di Vanni Filipepi, better known as Sandro Botticelli (c. 1445[Never Heard of This] – May 17, 1510) was an Italian painter of dubious skill but is credited with creating the first nude pin-up in history. His painting The Birth of Venus would go on to become his most famous work, even though it is evident that Botticelli had never seen a naked woman before and was working entirely from a maternal memory of doubtful providence.

Botticelli (that's Botty-Chilly in the local Tuscan dialect) was born in 1445 near Florence, then a city that was becoming convinced it was true cultural capital of Italy. The Florentine rulers of the time, the Medici, were a family of avaricious bankers who had made their money selling Medieval derivatives in exchange for the new fangled 'Renaissance' stocks a few years earlier. Their success encouraged all other wanabe painters, sculptors (and those who worked only with bottled piss) to hot foot it to Florence is search of rich patrons and cheap whores.

Amongst those looking for employment from the local Florentine city council was Alessandro di Mariano di Vanni Filipepi, a barrel chested man with uncouth manners. He was called 'Botticelli' because Filipepi was so poor that his arse literally hung out of his gaily coloured hose - and the name stuck. 'Botty' took to his new name and it also got him his first major gig as an artist. A nunnery commissioned him to paint a Madonna. Botticelli turned up a few days with Madonna painted on stage in a conical bra receiving a thorough whipping from Jean-Paul Gaultier. The Sisters accepted the work and prayed to God for understanding. At least Botticelli got paid and a free pass to return there if he wanted somewhere discreet to crash.

Botticelli then got a job as an understudy to Fra Filippo Lippi, helping to mix the old man's paint, preparing his canvases and finding low lifes to pose as models for various religious paintings. When Lippi was reluctant to share his big commissions with Botticelli, the irritated understudy threw some Sienna Red in a broth of Tuscan soup, choking Lippi to death. At this time Botticelli also dabbled in working in plaster and pebble dash (or as he said 'Byzantine mosaic) but was surprised that his most popular works were created by simply pressing his own naked body into the wet plaster and selling the results to local monasteries as Holy Relics. It also helped to pay Botticelli's accumulating tavern bills.

It was around this time in about 1470 that Botticelli shifted from painting religious paintings for the Catholic church and started to work on pagan themes for private clients. Amongst his early work was a painting labelled 'Venus and Mars' - though to save time, Botticelli painted her with only one leg. Then Lorenzo Pierfranco Medici (one of the lesser deposits in that family) asked Botticelli that he wanted to see Venus 'naked' and was looking forward to hanging that particular painting in his glass ceiling decorated bedroom. Botticelli agreed, though perhaps odd for a painting, confessed that he had never worked with nude female models and only using men with large chests, like his good friend Michelangelo. Pierfranco Medici insisted only that his Venus be 'blonde', so Botticelli took the commission and finally finished the work that he is now best known for.

Botticelli throws in a nude in some moral tale or other.

The painting was a hit in Florence and other artists begged Botticelli to grant them rights to copy the painting for anything from advertising hand bills to allegorical tapestries. But the picture remained in private hands and some of the later reproductions were to be rather broad in their rendition of the work.

Botticelli's reputation also got him noticed in Rome where Pope Innocent VIII was also thinking about having his bedroom decorated. He asked Botticelli if there were any suitable 'nudies' in the Bible he could illustrate. Botticelli did come up with a painting or two which showed Naked Truth (as a blonde) wailing as some injustice happened in front of her eyes. A letter from the Pope to Botticelli congratulated him for ..illustrating the subject with enough suggestion to get people to look at it but not too much to erotically arouse at the same time. Botticelli thought he had done what was asked for but when the Innocent died, his successor Pope Alexander VI preferred the more direct method in gaining his mix of 'sin and penitence' and sacked the artist. 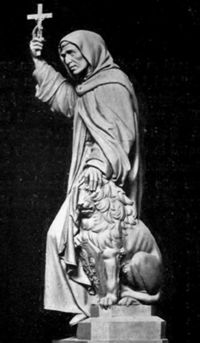 Botticelli got religion - and a sad little lion.

In the 1490s Botticelli became a Born Again Catholic and a supporter of the fire and brimstone preacher Girolamo Savonarola. A religious leader in the tradition of a raving lunatic, Savonarola asked all his disciples to destroy all sinful or wasteful goods and to repent. Botticelli got caught up with this mania and threw many of his paintings on the bonfire. So disappeared for ever were works we only have names for including Delta of Venus, Beach Babe Venus and High School Venus. However when Savonarola blamed the Papacy for 'leading us all into whoredom..' Pope Alexander threatened Florence with 'Denial of the Sacraments', the authorities executed Savonarola, hanging and burning him at the same time in what appears to be exaggerated overkill.

Botticelli got off with a fine for his association with Savonarola but decided to give up painting, renting his studio to a Pilates class. He moved to a villa outside Florence where he would sit on a verandah, strumming a six string mandolin. Botticelli's other enjoyment was to post waspish reviews in 'The New Florentina' of his painting rivals. Using various pen names (Angry Artist was one of them), Botticelli poured scorn on the paintings of Michelangelo and Leonardo da Vinci. Botticelli especially took against the painter Raphael by mailing his own shit to the curly haired artist.

When Botticelli died in 1510 he really was a forgotten man. His art works when compared to Leonardo da Vinci were said to be the splashings of an amateur. Later artists also decried Botticelli's Blonde Fixation and dismissed his career as a 'waste of good oil'. It wasn't until the 19th century that Botticelli's works were taken out of cellars to be displayed again. It was a belated rehabilitation but , at least for those who owned the paintings, a nicely lucrative earner.