Pet Heaven is like People Heaven, except for pets. It is separate from People Heaven, thus giving it its name. Only good animals go here; the rest go to Hell. Pet Heaven (which henceforth will be called P-Heaven, because that sounds more awesome) was constructed in 6,000 BNR when regular Heaven, which housed both people and animals alike, ran out of room. At first, this problem was solved by throwing excess cats back down to Earth. Thus, the popular expressions, "It's raining cats and dogs.", "Cats always land on their feet." and "Holy fuck I just got hit by a cat, that really hurts, please get off."

Soon the pet population on earth sky rocketed, cats seemed to have nine lives and there was smashed dog bodies every where. God realised the problem had gotten out of control while watching The Price Is Right. Appaled by Bob Barker's malicious acts of murder upon cats and dogs on stage, God decided that it was time to create P-Heaven.

The cloud formation on which P-Heaven sits is that one that you think looks like a dog, a poodle to be exact, a french poodle, that's white, like a cloud. It is mostly made of dirt, crystals, water vapor, fairies, and generous donations to your local church, synagogue, stripper factory, animal shelter or mosque. 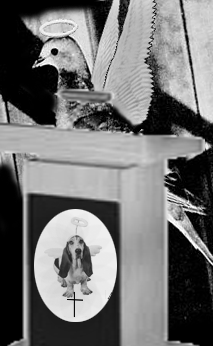 Martha, the last of the Passenger Pigeons, and the spokesbird for P-Heaven.

In the beginning of time, there were no pets; Ergo, there was no reason to have a separate area for dead pets. But then the Big Bang happened, and there was a whole lotta shakin' goin' on. 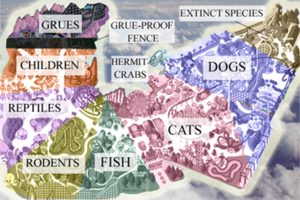 The map of P-Heaven, given to all new residents upon arrival.

Almost any animal that has been good goes to P-Heaven.

Despite popular belief, there \'\'are\'\' Grues in P-Heaven. However, they are secluded in a peninsula of the P-Heaven cloudmass. Surrounding their compound is a Grue-proof forcefield. Immediately after that is a living wall of kickass pets, like giraffes, gorillas, Godzilla, etc. There is also a smaller version of he Deathstar, ready to fire lasers. So we have nothing to fear. Yet.

The location of P-Heaven is debated by many people. To shut their mouths, two separate theories have been made on this subject:

Some scientists think that P-Heaven stays in one place.

Other scientists think that the cloud formation on which P-Heaven rests moves around frequently. Their theory is based upon the fact that it rains frogs, cats, tax-exemptions, and other animals in many different places on the Earth. Based on their calculations, observations, and fornications, P-Heaven is traveling on a loop in the shape of Oscar Wilde. The scientists' next project is speculating what kind of shit God is trying to pull with this.

Does not exist; nobody wants to go here. Except for me. Because all dogs go to heaven.

The answer is, in fact, no; huffed kittens don't actually die, they become zombies.