Pathology is the study of the nature and processes underlying paths, and other forms of walking tracks, routes and trails. Pathology is an ancient art, and many paths can even be found dating right back to the very first humans. Pathology is an important part of society, as without paths we would be unable to go anywhere without vehicles, including going to said vehicles.

The work of a pathologist[edit] 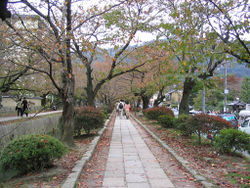 This path in Japan scores highly on picturesquosity on the RPS scale.

There are many duties involved in being a pathologist, but their life's purpose is their path creating work. Most pathologists generally work from commissions from councils or forest builders, but many also create for fun wherever they feel like too. They may also be hired to study and grade particular existing paths using the Richeimer Path Scale (RPS), and recommend ways to maximise their RPS score to make them more acceptable. They may occasionally offer metaphysical path advice, such as advice about your life path, but this area of pathology is generally looked down upon by more traditional pathologists.

There are many pathology competitions that take place all around the world. One of the most prestigious path exhibition/competitions in the world is the Royal Path Show, held at various places around Great Britain each year, which hundreds of pathologists flock to, both to show off their own pathwork and mock the pathwork of others.

The primary goal of pathology is to study the four main aspects of a path:

There are many specialist areas and types of path within the pathological subject, some of which are:

Crazy paving is usually created by the more eccentric pathologists. It ignores all the standard rules and customs involved in creating paths, and instead attempts to represent very deep philosophical ideas in path form. It has a similar relationship to traditional pathology as modern art does to actual art. Crazy paving paths are often referred to as psychopaths. And so are their creators.

Snakes and Ladders and Celtic Knot[edit]

A definite reaction to Roman notions of the importance of building roads as straight as possible, adherents of this style of pathology believe that the longer a path takes to reach its destination, the more time a person has to bond with that path while travelling on it, thus making their journey more enjoyable. Jackson Pollock specialised in very windy paths, and was so good at it, he could create a path between two points a few hundred feet apart that went on for miles. His paths would often score a windology level of 38 and above on the RPS.

Snakes and Ladders is a similar path-building method, used for very popular or busy paths, and involves including as many shortcuts and misleading back-tracks as possible. The reasoning behind this being that while it may not make your trip along the path quicker in reality (in many cases, it's much, much slower), you won't notice because of the time-dilating effects of all the fun you'll be having, making the trip seem quicker.

Virtual pathology is the creation of paths people can't actually see. People often don't realise such paths exist. The most common use of these virtual paths is in the transport industry, for aeroplane flight paths or shipping paths etc, but there is also a large community of spiritual pathologists who believe they can read and in some cases build peoples' life paths. Most traditional pathologists look down on such applications of pathology, but the spiritual pathologists insist that it isn't a all hoax, they are very serious about what they do, they give hope to people who need it, and that it isn't a all hoax. Virtual or metaphysical pathology has become very popular in recent times, because as learn about it, they naturally want to know the exact picturesqosity, integrity, windology, and most importantly, length of their life path. 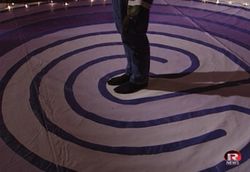 A sad case of advanced pathlabyritis.

The real risk for pathologists lies in their susceptibility to the vicious and terminal so called pathlabyritis. The first signs of this cruel disease are seen in paths which for no apparent reason double back on themselves. If early diagnosis is made, sufferers can be offered temporary employment designing queuing systems for films and popular tourist attractions. Eventually however, their symptoms become so severe that sadly they cannot be allowed to continue.