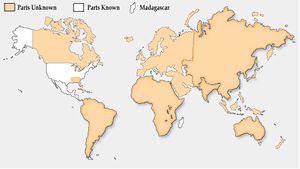 "...And there be monsters in those evile places. Monsters and ladies of the night," said the pirate. "So what's the downside?" asked the kid. "Arrrghh. I 'spose the downside be the lack of good hotels," the pirate replied.

Not much is known about Parts Unknown. If we knew a lot about it, it would be Parts Known, wouldn't it, Einstein?

For as long as we had known, parts unknown had been everywhere but the Continental United States, Alaska, Mexico, and Madagascar. After a long search, scientists found the country of Parts Unknown in the eastern of Europe. At first, they thought they were in Boréliana, so they called the citizens of Parts Unknown Borélians. That's why the language of Parts Unknown is called Borélio till today. After some of the scientists entered the the Snö-Desert, they've never been seen again.

I do know a little about Parts Unknown as I lived there in the 30's, but it may have changed since. Michelangelo

We can only guess at the economy, which most assuredly is non-existent. We haven't found anything to support a currency for Parts Unknown, so must assume they trade in chickens and bovine, much like our ancestors. At least in the capital Üdenfurt exist some service bureaus. Beside that, most of the citizens spend their money to get wrestling tickets.

The form of government in Parts Unknown is a monarchy. King is Karl von "fuckin'" Üdenfurt. His deputy is his son Prince Berti II.

All of them, if they do exist, hate us for what we have, if they know we have it, and want it from us. In the event the uncivilized get to Parts Known from Parts Unknown, there will be war and there will be casualties in the millions. To be captured by the savages is like cutting out your own eyeballs and eating yourself, except now the savages are cutting out your eyeballs and eating you. No quarter will be given. Shoot first. Don't ask any questions.