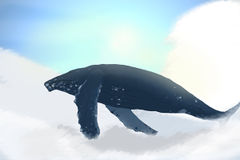 A rare photo of an Oklahoma Air Whale

The elusive and rarely seen Oklahoma Air Whale is a flying beast native to the state of Oklahoma. These majestic creatures show themselves only to true Oklahomians, and are often considered to be the most beautiful thing ever created. Their habit of hiding from non-Oklahomians has led to the outside world not believing in them. However, they do exist. Trust us.

What do they look like?[edit | edit source]

The Oklahoma Air Whale looks just like any other whale, except it flys at speeds exceeding 200 MPH. It also has a distinctive pink hue, generates rainbows from its blowhole, and sings a song that blows regular whales right out of the water. Literaly. They hear it and are violently expelled from the ocean.

However, as sightings are rare, many do not believe the Air Whale looks anything like this, and instead prefer to think of them as giant, ugly whales with wings.

What do they do?[edit | edit source]

The Oklahoma Air Whale plays an extremly important part in the ecology of Oklahoma. By flying wherever they please, these amazing creatures clean up the air of their home state, purifying it wherever their pink hide touches. This has led them to be voted the creature best for the environment many times over. However, the rainbows they generate are considered to be hazardous, as peoples and animals alike who see them are likely to fall to their knees and cry.

Air Whales have also been known to perform miracles of such brilliance that they have been known to make Jesus jealous. Recorded miracles have included generating the tornado that swept up the Seatle Supersonics, defeating the Flying Spaghetti Monster in a wrestling match, and stealing the long bit of their native state from Texas. But they should never be forgotten for their work in preserving the native to Oklahoma Puddypos, a now extinct species of autonomous mangoes.

What do they eat?[edit | edit source]

The Oklahoma Air Whale, being a creature of pure benevolence, eats only clouds, air pollutants, and teeny, tiny microbes that survive at high altitudes. However, on the rare occasion that one descends from its lofty perch in the clouds, they have been known to eat the occasional small airplane. These occurences are rare, and those who have witnessed it believe that the Air Whale has merely taken the blessed one to a better place.

Where do they live?[edit | edit source]

The Oklahoma Air Whale, as noted earlier, lives only in Oklahoma, high, high above everyone's heads. They commonly reside at altitudes of 6,000 feet, coming down to 100 feet only during their one-day mating season. It is during this time that sightings take place, though some young, playful Air Whales have been known to come down at least once a month.

Air Whales are physically incapable of leaving Oklahoma, and will spontaneously combust if they make the attempt. Recent migration attempts have drastically lowered the population of Air Whales, leading Oklahomians to enact a law forbidding whaling in their state[1]. This is an act looked at with a sense of humor by the outside world, but a very serious matter.

How often are they sighted?[edit | edit source]

As noted earlier, the Oklahoma Air Whale will only show itself to true Oklahomans, and will either hide from or disappear from the view of outsiders . While biologist's have yet to explain why these wonderful creatures take up this action, it is believed that they see any and all non-Oklahoman creatures a threat to their existence. Regardless, this behavior has led confirmed sightings to be few and far between.

So, do they exist?[edit | edit source]

Of course the Oklahoma Air Whale exists! Why shouldn't it? If everyone in Oklahoma (a rural, backwards state) has seen it, who's to say they don't? If you think that the incredible Air Whale does not exist, you are either from out of Oklahoma, or you have no imagination! In either case, pity your existance!