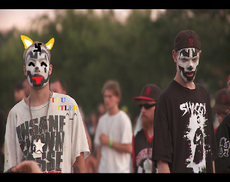 The Nazi Furfag Juggalo Weeaboo is a cryptid creature that few had seen. As it's name suggests, This Horror has the traits of a furfag, a Nazi, a Juggalo, and a Weeaboo, and thus forming an extremely terrifying being that will repel any person or creature in the world, aside of furfags, weeaboos, juggalos and nazis. There is an estimated amount of at least 250 of these horrid creatures in the world, but since they rarely go out of their basements, this is not known. anybody who had even so sighted these creatures had exploded into a massive puddle of faggotry.

It is always white. There is no such thing as a Black reported that there is one, Japanese, Chinese, Gypsy, Jew, or Indian Nazi Juggalo Furfag Weeaboo, because there are no other race that can become juggalos, furfags, nazis and weeaboos at the same time. Not even the japanese. only whites. 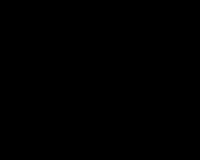 Drawn by a nazi juggalo furfag weeaboo (Censored. Too disgusting.)

Despite not entitled to be one, it IS a Brony, and will probably attempt to have an erection (but cannot because it has an 1-inch-nub-dick) if it sees even a sight of a pony. This is because it is a furfag.

It speaks in a false japanese accent, but it is actually speaking english. This is never proven but is highly acclaimed true, since anybody who had heard it speaking possibly exploded in faggotry. 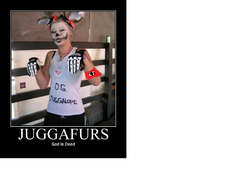 It is reported to be sighted wearing fursuits with juggalo markings and an armband with a swastika on it. Another theory is that it wears white, doglike facepaint with a swastika armband.

It has an radius of faggotry surrounding it. This radius is a combination of weeaboofaggotry, furfaggotry, juggalofaggotry, and pure aryan nazism. As a result, any person who got near it exploded due to it's extreme, subhuman faggotry and extends to about 150 miles around the NFJW.

There is one black nazi furfag juggalo weeaboo sighted in 6, june, 2006. and was sighted singing one of insane clown posse's songs in false japanese accent while eating pocky. despite the person who sighted it exploded, the camera was found by a scientist.

It's only diet is faygo, pocky and ramen noodles. it might also eat nazis in order to strengthen itself.

It is sometimes seen on DeviantART. They can be signified with their disgusting, vomit-inducing "art", and a massive number of furfags, weeaboos, nazis and/or juggalos watching them.

This cryptid is only found in the united states, germany and austrailia because only there can Nazis, furfags, juggalos, and weeaboos exist at the same time. Any other place will never see such faggotry roaming around.

Few had killed the NFJW because anyone going near it will explode into a puddle of faggotry regardless of who the person or creature is. However, there is an anonymous faghunter that has killed at least 8 of these creatures. According to him, The best method to kill these creatures is to shoot a silver bullet onto their head while wearing a fursuit (which protects you from the radius.). Despite wearing a fursuit seems like a strange option, it is the safest way to dispatch these hideous creatures while fighting fire with fire. Since fursuits are despised by majorities, the fursuit is sanctified by a seal on the forehead.

These creatures will most likely die alone because their sheer faggotry and organism-repelling smell prevents them from reproducing.