For those without comedic tastes, the so-called experts at Wikipedia have an article about NTSC.

“I'm sure this text was a different color yesterday”

“I'm sure Steve Austin was a different color yesterday”

NTSC, named for the Never Twice (the) Same Colour, is an early standard for American Visual-Distortion-Units (or VDU's). It is the American equivalent of the PAL (Perfectly-Acceptable-Lightwaves) standard. One of the most fascinating (or annoying) features of the NTSC standard is that every device which claims to conform to the standard in fact renders images in totally different colors. Historically it has also resulted in smaller display resolutions as a result of extra hardware required to color-correct the display during the vertical blanking interval. Supporters of the standard claim it is now much better and only has problems when displaying color. 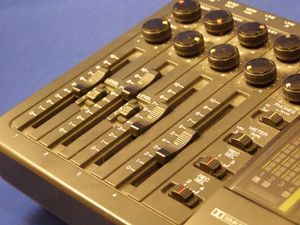 In Soviet Russia, color chooses YOU using knobs and sliders (or VIRS)

NTSC like most things, was invented by the Chinese in 1503 B.C. after lengthy discussions and the ratification of the 8th treaty of Xang-Duame (The capital city of China at that time which was eventually flattened by Godzilla during the 1114 great film festival of Xand-Duame, which was in fact the last film festival ever held there).

The first seven treaties were abandoned due to the American delegates mis-reading their invitation and arriving dressed in Purple suits and an incident involving the translation of Oscar Wilde quotes. Indeed it was the Chinese who invented the Jade green Oscar awards which only became gold after they were spray-painted by the American Mafia to hide their origins (and thus avoid paying for them).

It wasn't until Microsoft acquired the rights to use the NTSC standard [citation optional] that Visual Distortion Units went back to using green text on a black background just to avoid a hostile takeover bid which had been launched by the Chinese 2 years earlier. This bid failed after the Chinese government attempted to buy Micro$oft using red dollar bills which they firmly believed was the correct color of American currency when they printed it.

Another revision was made when the VIRS, or Vertical Interval Reference Signal, was introduced & at first appeared to be allegedly developed by the American TV industry to overcome the shortcomings of NTSC. The VIRS is a signal inserted in the Vertical Blanking Interval, or VBI, of the video signal (the same area where closed captioning data, and data for other secret digital communications between TV networks on how to create even crappier tv programming, is carried) that allows TV sets (as well as broadcast television equipment) equipped with VIRS-receiving circuitry to automatically adjust the set's (or equipment's) color to how it was originally created. But most TV manufacturers and the television-viewing public considered this a plot by the Communists to take over the NTSC standard and Americans' tv sets, due to the fact that in Soviet Russia, color chooses YOU (as mentioned previously), or your TV set in this case.

It was then suspected that VIRS was a plot by Soviet Russia. It was finally determined in 1983 by the CIA, the Canadian Security Intelligence Service, the Mexican CISEN, and the Japanese Defense Intelligence Headquarters (USA, Canada, Mexico and Japan being all NTSC countries) through a joint multi-national effort called PROJECT CHROMATOSE that VIRS was indeed secretly developed by Soviet video engineers in the 1970s, and then secretly introduced in the early 1980s by Soviet sleeper agents posing as American television & video engineers working at all the major TV stations and networks in the USA (who would then covertly install Soviet-made VIRS generators at the television transmission facilities of their cover's employer). The CIA and other intelligence agencies worldwide have determined that VIRS was introduced to infiltrate the perceived American superiority of NTSC, as well as to be used as one of many tools for a Communist invasion of the USA. Due to the resulting backlash (but moreso due to the CIA's most-covert intervention with the TV broadcast industry in the US), VIRS never caught on, and NTSC, America, and its TV sets and their Hue/Tint knobs remained in freedom.

Critics argue that it's the missing 'u' in the U.S. implementation of Colour which causes the standard to fail citing arguments of 'missing byte from lookup tables'. In fact some theorists claim the colour-table lookup problems stem from later additions to the standard which are actually subversive alterations by the Chinese trying to get their own back for the Oscar Wilde quotes.

Other critics argue that it's just crap.