“I have more friends now”

An infacmous myspace whore posing in a mirror

A myspace whore is a person who has contracted the disease myspacium whoriatus (NWA for short). Myspacium whoriatus is a viral based server mental disorder similar to Obsessive compulsive disorder and is increasingly common in teenage females. There is no current know cure for the infection expet for death or removal of internet connection, side effects often include suicide. Both methods are highly successful for both patient and society. All though when contracted is not as serious as scenorfius kiddius or emioitis, it is believe that the two are in some way linked, extensive research has shown similar vocabulary used by the two such as "<3" and "rawr".

Origin: not funny, just to let you know[edit]

The first incident occurred in 2003 when a small cult of Portuguese window cleaners began participating in intimate relationships with penguins. It is believed that they then passed this disease on to the local trout. The virus mutated during its stay in a five star trout hotel in the north sea where it was also transferred to mermaids. Shortly after this historic event it was announced the dutch navy had managed to contract the disease. Some believe that owner of Mess.be Dwergs in fact has an acute case of the virus, giving him the almost superhuman power to track down every possible change to the MSN messenger. 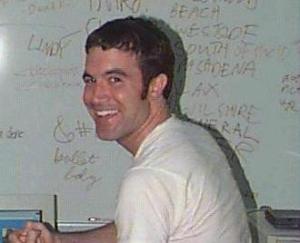 The main symptoms of the disorder include, loss of true social interaction, incontinence and erectile disfunction. Minor symptoms include becoming a cunt, as well as: 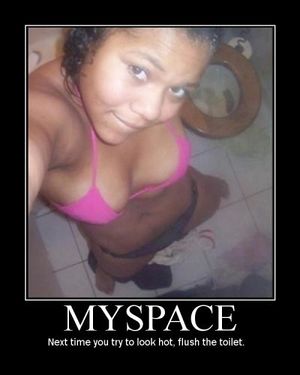 This girl proves how easy being a MySpace Whore can be.

A MySpace Whore is easy to identify. First of all they will have over 1000 friends. Secondly most of these people they have never met, and probably don't know anything about them. Next, you must look at their photos, although there are many kinds of photos that could be used, the mirror reflection and half naked approach are commonly used.

As with all viruses, there have been many random mutations, most of these have become completely unsuccessful and have failed miserably. the most successful of these "offspring" are:

Links With The War on Iraq[edit]

Americas recent war on Iraq was not in fact about terrorism, weapons of mass destruction or even oil. It in fact arose after a major dispute about how the number of page views on George Bush's myspace was lower than Saddam's. This seriously upset George. They met up in a dark Baghdad alley without Bush telling his parents, and Saddam turned out to be far older than it had said on his profile, but was in for quite a surprise when it turned out George Bush was male. When George Bush senior found out, he snuck into his sons office, and phoned Saddam's mother. unfortunately she was dead, and he got thought to the Orange Voice male service where he left a very rude message, he left this message under his own name which happened to also be his sons name. A few weeks later Saddam received this message while looking thought all his old junk and heard the message was from America. In retaliation he sent a flaming bag of koala poo to the white house, and the situation escalated from there.