From Uncyclopedia, the content-free encyclopedia
(Redirected from Mt. Everest)
Jump to navigation Jump to search 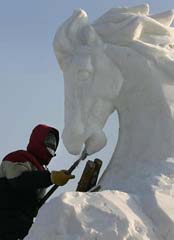 A british officer attempts to free his horse.

For those without comedic tastes, the self-proclaimed experts at Wikipedia have an article about Mount Everest.

Mount Everest is a British army instruction to cavalry troops that dates back to 1863. On receiving the order, a soldier must drop whatever they were doing, travel to Nepal, climb to the top of the highest mountain in the Hindu Kush range, return to barracks and shout "Climbed Sah bic booooi!".

The lucky ones were allowed to leave the horse behind.

Climbing the mountain is very easy and for those who cant climb at all, there are a happy bunch of sherpas who will carry people to the top of the mountain!

Mount-Everest.. There was this girl named "Everest". She was forbidding, aloof, the girl with the biggest tits, and would let anyone mount over her. This was this very place where the guys would come to mount over her. One day many guys were on top of her and then the avalanche came.. they were buried by the snow. and this was how the name "mount Everest" originated. It is the tallest peak in the world 8,848 m, and has been compared favourably to a frighteningly large ejaculation probe. 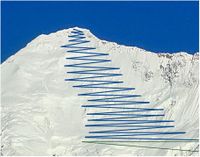 The ascent is made easier by disabled accessible ramps such as this one, installed on the west slope of Everest. It cost the Nepali government Rs. 620 million, which is around 6.72 Euros.

The instruction was developed by Brigadier Rosemary Gerald Stungunner as a way to teach cavalry troops that life is unfair, and especially so in the army. Its original form used many more letters than the modern version, and went something like this:

Stungunner believed that the best way to use the command was to creep up on a sleeping recruit at around 3am and preferably somewhere very far from Nepal. If the recruit complained that they had no climbing gear or that Everest was a very long way away, then they were to be shot, through the forhead, with one bullet. This would encourage others to climb - and save on bullets.

Stungunner proudly boasted of having personally shot more than sixteen cavalry officers. At his subsequent trial, he was unrepentant, claiming that discipline is the bread and butter of the British Army, and that it even tasted better than bread and butter, even if it was a little bit more crunchy. He was committed to a lunatic asylum with full privilages.

It has been written in some cultures that the Norse God Odin created Mt. Everest for a science fair project in the 8th Grade. He won 3rd place, behind Jesus Christ's "Great Wall of China" and Christopher Columbus's "America". 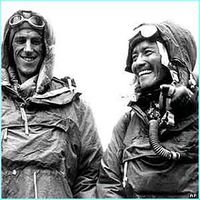 Hillary and Tenzing sharing a laugh while defrosting their monstrous testicles over a primus stove.

The first ever recorded cavalry officer to have received the order and successfully carried out, was Sir Edmund Hillary.

Hillary was lounging about huffing a puppy although many sources believe it was in fact a kitten when Brigadeer Stungunner ran up behind him and barked out the command. He immediately dropped what he was huffing and ran out of the barracks to catch a bus to the train station. A few weeks later he was in Nepal, hanging out with Sherpas and wondering where he could buy some snow shoes. In this time he contracted frostbite losing all his limbs thus being the first Officer to use the handicapped accessibility ramp.

Most of the Sherpas just kept pointing at Hillary and laughing, but Sherpa Tenzing took pity on him and offered to take Hillary to the top of the mountain in his helicopter. Hillary later wrote in his memoirs about how the tousle-haired Sherpa approached him with a grin and said:

Borat showing how easy it is.

The command should not be confused with "Mount Earnest" which was first used by the Royal Mounted Noel Cowards Batallion. The Noel Cowards were a fighting unit famed for their harmony singing and running away from gunfire.they were also famous for having it up the cliff richard after running away from gunfire. The command's existence is hotly denied by the army who, even today, keep a tight fist at the ready for anyone that minces with their troops. It refers to Private Earnest Gimp, who is often cited as having lain down his arms for his country, and who is probably the least fortunate soldier in all of England.

The command should not be confused with "Mount Have A Rest" which was first used when the Royal Mounted Narcoleptic Batallion was formed. Due to a shortage of able-bodied man power following the short-lived self-amputation fad of the early 1800s, the army were forced to train narcolepsy patients as horsemen to fight Africans for no good reason.

The cry "Mouuunnnnt.... 'Ave a rest!" was used by the Sergeant-Majors to induce a state of torpor in the troops before sending them onto the battlefield. Batallion Commander Sir Roger de Roger-Lloyd-Rogerson wrote in his memoirs: