From Uncyclopedia, the content-free encyclopedia
(Redirected from Mad Max)
Jump to navigation Jump to search
Whoops! Maybe you were looking for The Thunderdome?

If this article makes absolutely no sense to you, see its talk page. 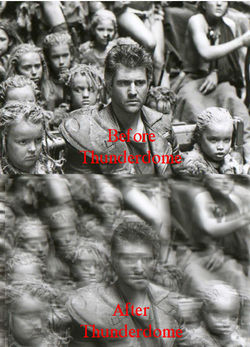 Now, imagine all this, plus alcohol!

Ah, the 80s. Plenty of Coke, Madonna, Reagan, and one monumental cinematic offering. That classic work of art is known as Mad Max Beyond Thunderdome -- a film heralded for being amazingly awesome for the first 45 minutes, and then incredibly shitty for the remaining 50. Now, instead of enjoying those first 45 only to suffer for almost another whole hour, why not REALLY enjoy the first 45 and slip out of consciousness when it becomes terrible? Sounds great, right?

Well friend, it is great. Its stay-at-home-Saturday-night great. When attempted with the proper attitude, you too can become elated by this lopsided masterpiece. Below is your challenge:

WELCOME TO ANOTHER EDITION OF
THUNDERDOME
! 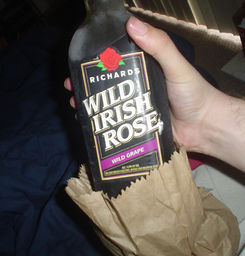 Wild I: This editor's Thunderdome beverage of choice

Now, like Thunderdome, the rules are simple: drink when it says to, and drink it straight from the bottle. That is all.

Insert your DVD, VHS, Betamax or Laserdisc now, and read on.

Round 1: One of the Living[edit]

Okay, now engage the play button on your remote, or go and press it manually if the remote is currently missing.

Take a big starter-offer drink for the sonic brilliance entitled One of the Living, performed by co-star extraordinare Tina Turner. Take the drink even before you hear the song (an experienced Thunderdome competitor can down his drink in the few seconds of ambient sound right before the song's first note). Take half a drink when Tina screams "YAY YAY YA-HOO!!"[1]

DO NOT drink for the pilot and his kid. They suck.

Alright, enter Max. One drink. And another half drink when the radioactive water salesman yells "Have a nice DAY!"'

Now, Max enters Bartertown. There are a few drink-worthy moments in this opening exposition, but drinking for every instance would be unwise (as we've only been through about 7 minutes of the film). This may be the time to engage in the optional drug use described in the Materials list.

Tip:
You can drink for Ton Ton, the blind saxophonist, but only if you enjoy his tragic refrain.

Put down the joint, its Tina time. Yes, the queen of soul, Ms. Turner if you're nasty. Drink immediately following the words "But he's just a raggedy-man!"

Allow the drinks to settle while Tina and her robust henchman get through a bit more plot exposition. Take another half drink for the rockin' Shit Shoveler's Theme, playing upon Max's arrival in the Underworld. Take a full shot when Max first encounters Master-Blaster, but only after Master shouts "Me King A-rab!" (Current Drink Count: 4 1/2, not including optionals | Time Elapsed: approximtely 18 minutes) 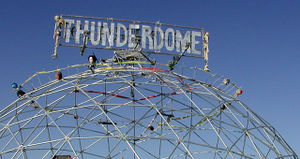 Smoke a cigarette during Master-Blaster's embargo. You probably already realized that you want one, suddenly. Prepare yourself for hell.

Well, time for the main event. Keep on your feet: there is a mandatory half shot prior to entering Thunderdome, when one of Tina's goons yells "MASTER-BLASTER, LISTEN TO THE LAAWWW!!"

Now, Thunderdome is game's grand equalizer. The object is to begin drinking as soon as Tina introduces Thunderdome, and to not stop until the match is over. That means taking drinks through the ring announcers entire speech, all the chanting, and the entire epic battle between Blaster and The Man with No Name.

Ladies and gentlemen, boys and girls: dyin' time's here! Two men enter, one man leaves! This is Thunderdome; death is listening, and will take the first man that screams.

Thunderdome, at any point beyond the 45-minute mark.

If you met the challenge of Thunderdome, there is absolutely no way you should be able to read this. If this is the case, you've made it, friend! Give yourself a pat on the back when you wake up, 50 refreshing,[2] garbage-free minutes later. For it is once Max is exiled from Bartertown that the irritating pack of children are introduced, and from there, Mad Max ceases to be interesting whatsoever.

However, if you're still not fully tanked, or chose to ignore the rules and/or pussied out on some of your drinking responsibilities, the only remedy is of course, continued drinking. Perhaps try switching to a stronger liquid. Never fear though; there is about 10 minutes of filler before Max encounters those annoying-ass children.

WARNING: Make doubly sure that you do in fact drink enough to sleep through the end of the film. Trust me, its quite a frightening situation, waking up bewildered with a flock of feral rugrats yelling, the lame pilot and his lame son doing things, and something involving all terrain vehicles... While hammered, this will confuse greatly, and may send you into a television-smashing rage, just to get the madness to cease. Avoid this predicament: drink heavily, and oftenly.