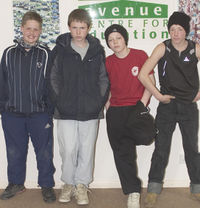 A borough of Luton commonly referred to as 'scum', Lewsey Farm is the home to some of the world's most unincredible people. These people are the types who; Have never heard of Jimi Hendrix, think Lee Evans is 'WELL FUNNY INIT' and most importantly of all, people who seriously describe Primark as 'glam'.

I know what you must be thinking; 'Where does one find Lambrini-drinking, hair-bleaching, phlegm-spitting cunts, all in one small farm?' Well my friends, you're in luck! Just take a right from the middle of nowhere and you'll find yourself surrouned by wiggas and prostitutes.

Many people wonder why Lousy Fam was ever built, but rumour has it, it has not always been almost entirely populated by chavs, and people who believe Jeremy Kyle is God.

Once upon a time, Lewsey Farmers toiled day and night to earn their keep, until one dark day, the Dole was invented. Many Farmers decided to take the easy way out, so therefore, moved into council flats and began insulting any half-decent soul who dared to cross their path.

And what happend to the Farmers who continued their hard work and good citizenship? They were eaten, for they smelt of Turkey Twizzlers.

Almost the whole Lewsey Farm community seem somewhat proud of the shit-hole they inhabit. 'WHYYYY??' is the question we are all asking. The truth is, they dont know what's wrong with it. They don't know any better than the filthy squats they were brought up in.

All around the... village? I don't know what the fuck it is. Anyway, all around the farm, you'll find God awful graffiti, saying things like 'LU4 4EVA' or just simply 'LWC'. These illiterate bastards know they'll be stuck in the crap forever, and are trying to put a happy face on it. Unfortunately, forever might not be much longer for these incoherent wankers, as the government have decided to blow the living Burberry out of Lewsey Farm, killing everyone to bits.

These people have pretend rivalries with LU3 and LU5, although, there have been reported sightings of inter-LU bummings.

For those without comedic tastes, the so-called experts at Wikipedia think they have an article about Lewsey Farm.

School of the Year 500 B.C. Barnfield West Academy seems to be the only high school in Lewsey Farm. Formerly known as Halyard, it's famous for being utterly and completely shit. I can't write anymore on this subject, as I will be shot for being gay. blasphemy.

Well, well, well. Being the most interesting place in the world, Lewsey Farm has many interesting sights to visit. It may take a while to list them all!

Lewsey Park; Home of the nameless river. On good days, it only has 3 bikes and a can of coke in it. However, good days only come around every 3,000 years. You can see this glorious river at any time of the year, just be wary of stabbings.

Pile of Sick; Perhaps the ninth wonder of the modern world, the layer of perhaps projectile vomit on the side of the road has attracted many species of birds, and the occasional hedgehog. See it, before the showers of spit wash it away.