From Uncyclopedia, the content-free encyclopedia
(Redirected from LaGrange)
Jump to navigation Jump to search

LaGrange, Illinois (often confused with Ukraine) was first inhabited by wandering drunks from Russia in 5000 bc.

In 1491, Raymuendo LaGrange discovered the land which is now known as LaGrange. It has to be noted that "LaGrange" in French means "the barn", a hint that Sir Raymuendo LaGrange was quite certainly a mime before becoming an explorer.

In 1492 LaGrange fell under the control of the Empire of the Four Squares, the citizens were enslaved under a Dictator known by Sir Phillips, a Viking warrior. He ruled with an Iron fist using advanced technology for the time like hand cannons and other ballistics to conquer surrounding villages until his death in 1753. Unfortunately, before his death he burned all documents regarding his leadership and town history. The Empire fell apart and the town was unstable until a leader known as Cautious Casey of PleasentVille promised a new kind of hope for the citizens in 1759. In the Winter of 1759 He instituted The WALL program that was to put citizens to work by building walls and fortifications that isolated the village from the outside world. Nobody was able to go beyond the walls because Cautious Casey told them that there was bad things beyond the walls. The program was completed in 1761. LaGrange was flourshing under this rule until all resources were used up and the citizens and the leadership starved to death in 1775. LaGrange was a barren wasteland until it was re-discovered by Prokaskius III in 1813. His militant Fascist regime tore down the walls of Cautious Casey in 1815 because they suffered decay and were significanty outdated. Prokaskius the III lead his people in a similar way that of Cautious Casey with building citizen infrastructure, however a Wall Program was not instituted. In 1822 Prokaskious III initiated a campain to spy on it's citizens fearing a revolution. Many people were rounded up and taken to extermination camps in the Northern most part of the town. A band of revolutionary citizens lead by the Lord Metz fled to the southern woods and established many guerilla warfare outposts. In October of 1823 Prokaskius III wanted to end the guerillas so he sent out a regiment of Calvary Scouts to the southern woods. They were ambushed and slaughtered relentlessly by the Poslamists led by Arch Duke Posluzny on their expedition to the Westchester Settlement. Prokaskius III mobilized his Elite Black Hand army to neutralize the revolutionary Citizens led by Lord Metz and the Poslamist regime led by Arch Duke Posluzny. Fed up with the Lord Metz and Arch-Duke Posluzny now being allies, Prokaskius III declared a major unconventional war against the team, which has ravaged the land ever since. 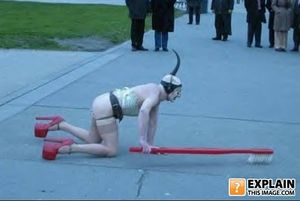 When a Citizen is convicted of a minor crime he is forced to wear this outfit and clean the streets with a toothbrush .

Extortion and Racketeering: Lets just say that it is dangerous to open a business within the village

Property Damage: Nearly all the buildings in LaGrange are currently in a state of urban decay.

I: Tho shalt not kill... unless it is a beer related incident.

II: Ye who has cast the first stone shall be embraced by all other group members.

III: Unprotected sex is a mortal sin... unless a child is the intention; in which case both members of the party must agree on said child.

V: Drunk driving is not acceptable... all Red Stripe commercial rules apply as to how to get their keys.

VI: No man, woman, or child is to drive under the speed limit... EVER!

VII: Though shalt not converse with or otherwise acknowledge a teacher outside of school business, even when said teacher is an actual friend.

VIII: Before marriage, a man will lie awake all night thinking about something you say. After marriage, he will fall asleep before you finish.

X: Music of Kenny G aint allowed, but one obvious exception exists. His most recent tune is called Lagrangian relaxation. That one is cool.

XI: These commandments are not multiple choice.