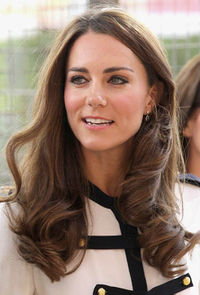 Catherine Middleclass-Windsor, otherwise known as Kate Middling, Kate 'I Am So Bloody Lucky I Bagged a Willy', Duchess of Cambridge and wife of a balding prince has been judged the most beautiful woman in the world by the Daily Mail. Everywhere she goes, 'Katie' is cheered and asked to show 'more leg and arse' by the photographers, keen to capture her regal-in-waiting rear. When Kate's Grandmother-in-law finally dies and gets stuffed for the Windsor Tomb and her father-in-law Prince Charles is barred from the throne on the grounds of his all round lunacy, then England[1] will have a new Queen.

Born in 1982, Kate Muggle is the daughter of a former air line pilot Michael 'Mike' Muggle and his wife, air hostess Carole Dutyfree-Trolley. Rumours that Kate was conceived in a rest cabin on a long haul flight between London and Singapore have since been proved to be correct. Kate has a younger sister Pippa Bum-Muggle and a brother known as 'Leech'. Bullied at school for their names and the Harry Potter connection, the Muggles rebranded themselves as the Middletons, neither dirt poor or stinky rich. By then her parents were no longer flying and had instead invested their air miles in starting up an expensive 'party poppers' company to supply junk for tasteless weddings and Christmas parties. Made in Middleton sounded like an important place but really meant 'crap' in all languages. 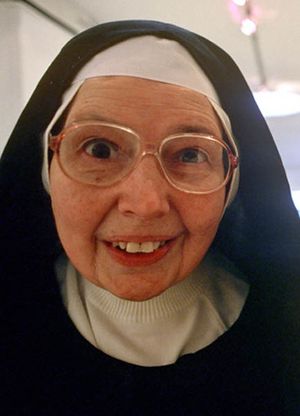 Sister Wendy. The nun who brought William and Kate together.

Kate grew up with a lot of silver spoons to choose from when eating her muesli. The Middletons bought land and ponies and became feverent royalists. When Princess Diana was assassinated by the French medical services in Paris in 1997, the Middletons went into mourning. Kate said this was the first time she saw Prince William on television and fell in love with him. But what chance had she with a royal, even her own folks would be shown the tradesmen's entrance if they tried to gain access to Buckingham Palace to personally pass on their condolences.

Then fate threw Kate and William together. Coincidently, both decided they would study Art History. Their artistic interests had been tickled by watching a buck toothed nun known as Sister Wendy[2] trawling around art galleries and praising artists when they got 'pubic hair right'. For William and Kate this was a touch 'risque' and knew it could upset their families. So they enrolled for an art course at St.Andrews in Scotland and moved there.

Like everyone else at the time, Kate was aware that Prince William was at the same university as her and then discovered they were also doing the same course. But when she first went to her class, other female students were already trying to sit as close to William as possible without actually sitting on his lap.

Then perhaps reading about how Cleopatra had first seduced Julius Caesar by appearing in a rolled up carpet, Kate tried to have herself smuggled into William's bedroom in a laundry basket. But the security services who were looking after the Prince had already got wise to this trick and numerous wannabe princesses had found themselves in the dry cleaning department of the university instead of snuggling up with a prince. Then a friend of Kate asked if she wanted to appear half naked in a fashion show, with the knowledge that William had got a taste for looking at women on a catwalk. An opportunity was there.

Get 'Em Orf for a Royal[edit] 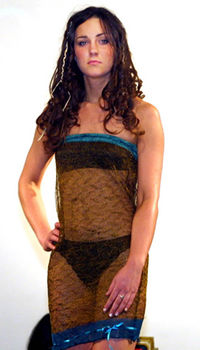 The dress that bagged a prince. The face came later.

William and his friends booked a table close to the catwalk and got ready to watch. Why William was so keen to glimpse teenage girls in possibly degrading show was never really explained. It least it showed 'Willy' was keen to try out new experiences and in the Post-Diana age, he appeared to be a lot less like a stuffed shirt then the rest of the Windsors.

Backstage Kate turned up to model. She choose a skimpy, see through affair that the other girls were not willing to wear. But she had remembered that her mother had told her 'never go shy at an opportunity'. So out she appeared, strutting down the catwalk in her 'barely there' outfit. William's jaw dropped and below the table, something else stirred to life. His friends laughed and pointed but 'Honker Wales' as the Prince was known, now showed great interest. Who was this?

Back in her own clothes again, Kate went to celebrate in the student bar. William followed her there and sent a note: Come over at 8.00. I will tell my detective to leave us for an hour. Whether either or both were still Branstons at this stage is not known but they were soon upto regular action in the traditional student way.

Buckingham Palace soon learned of the Prince's art discussions with Kate. The Queen ordered a full geneological survey of the Middletons (née Muggles) since the Domesday Book. When it came up with 'nothing known to embarrass', the Queen gave her consent to more couplings. Kate had passed her biggest test, the 'suitability' one, even if she was not an aristocrat or a foreign-born royal. Prince Charles did privately suggest if his son wanted to 'sow a few more wild oats' before settling down. When William said he wasn't sure, Kate was told to 'give it a rest' and left the prince alone. By then news that William was seeing a woman was greeted with relief after many scandal magazines and websites were suggesting William was obviously gay.

For the next few months Kate lay low and avoided taking up with any men. Would her prince come back to her? The Prince meanwhile was now in the British army (though not as an ordinary soldier, all royals are automatically Field Marshals). To his father's disappointment, William couldn't shake the image of Kate on the catwalk from his mind. He decided that Kate was just the right one for him and that frankly, he couldn't be arsed to chase any willing skirt.

In 2011 William and Kate decided they were now too far gone to pull out of the relationship and so went ahead with a private wedding along the streets of London. Perhaps William was also bothered that if he waited any longer, his hair wouldn't and didn't want to be total baldy on his marriage day. Kate looked like princess on the day, a stick thin one, the 'Countess of Anorexia' as she was called by some of the foreign press (British media were too scared to say this).

Princess Catherine is expected to announce she is 'baking a royal bun' for the anniversary of the wedding and/or the Diamond Jubilee for the Queen. If it is a girl, she will be baptised and offered as a blood sacrifice to the Roman Catholic Church as appeasement for the Reformation.

Then Kate will go on tour with the Regina Monologues, a stand-up routine for the masses to reconcile them to supporting the monarchy. Kate will talk about how hard it is to be regal when forced to shake hands all day long with flatulent bores in funny clothes and big boners for her. She will then talk about people outside Buckingham Palace and end the performance with a heart-rendering song and dance number I Am Willy's Warmer.

By 2015, William and Kate will be ready to organise a Royal Coup if the old Queen doesn't die first. Prince Charles will then be padlocked, dressed as a tampon, and then shoved into the reproductive organs of a Wale (since he is The Man Formerly Known As Prince of Wales).