From Uncyclopedia, the content-free encyclopedia
(Redirected from Jazz Hands)
Jump to navigation Jump to search

“Having Jazz Hands doesn't mean your gay, it just means you like having sex with men.”

“Those Greeks are gonna get it now!”

Jazz hands is a cultural phenomon that is sweeping the internet even as you read this. Though it can take years of training to master the proper technique, a rather ugly set of Jazz Hands can be obtained by following these simple steps.

A fourteenth century rapist, who bears a striking resemblence to a twentieth century racist

The origins of the Jazz hands phenomenon are clouded in hatred and disgust. The manouveur has undergone various changes, and has had various meanings, many of which are quite different. Originally, in ancient Buda, but not Pest, a strange disease, similar to hayfever, was widespread, its effects caused not sneezing and a runny nose, but a shaking of the hands, and forced smile. The disease was thought to be infectious, and so sufferers were avoided. All the diseased freaks were killed in a slapstick incident of extreme horror, worse than the holocaust and Material Girls with that slag Hillary whatserface and that whore of her sister. A vivid portrayal can be seen in Back to the Future meets Bill and Ted, a made for tv documentary. After this hilarious occurence, the sign, called "Jasandz" by Hungarian locals, as well as Hungry yokels. It was used as an insult, to anyone thought to be ill or diseased in any way, but mainly by lepors, and leopards, to warn people of their plight. After this it was largely forgotten, until fourteenth century Venice.

In Venice, rape was a serious crime, for some reason. Anyone suspected was tarred on the face and hands, the tools of a rapists trade, leaving them stuck in the jazz hands position. When taken to court, where they would remain still to plead innocent, and wave to plead guilty.

In 18th century France, jazz hands were not used. I don't know why I mentioned it really. However a similar sign used by the aristocracy was raising hands in surrender.

Jazz hands were considered as a nazi salute, but it was decided that the smile was too false, and they had a reputation to keep up, so continued to use the original Heil Hitler straight arm style.

Now Jazz hands are used only by those who think they have a multitude of talents, but actually can't sing, dance or act. Even so, they fail to realise its meaning: I am a diseased rapist nazi sympathiser.

Jazz Hands Around The World[edit]

The phenomon of Jazz Hands is known around the world. However, some countries have jazzier hands than others. This trait has been linked to the overall gayness of the country. That is, how much the country wants to have sex with you. Some countries with notably jazzy hands are:

The United States of America[edit]

America is known to have started the Jazz Hand craze, but has not done much else with it. American Jazz Hands are notably dull in comparison to Jazz hands from Haiti and Laos. This lack of jazziness probably comes from the fact that more than half of the population consists of Jesus loving rednecks, and therefore oppose rapid movements of the hands. Jesus said so himself (Matthew 16:13-17:27.).

Jazz Hands are so much a part of English culture that there is even a soccer team named after them, the Lanchester Jazz Hands. This team is known for being the only team to be beaten by the Manchester United (August 18, 1818). Apart from this incedent, Lanchester is the self-proclaimed "Jazz Hand Capital of the World".

Jazz Hands in Russia is a multi-billion ruble industry. It consists of two semi-political parties that compete in tournaments and elections. After a year the winner is proclaimed, and that party begins a seventy-year dictatorship. The most popular pre-Cold War party was the Soviet Communist Association of Jazzy Extremities (Russian: Советский коммунистический ассоциация джазовых конечностей). After the collapse of the Soviet Union the SCAJE was found guilty of crimes agianst humanity, and two competing parties arose; The Democratic Socialist Party for to Make Hands of Jazz (Russian: Демократическая Социалистическая партия для того, чтобы сделать руки Джаз), and the Soviet-Hunting Nihilistic Extremists for the Execution of Babies and Shaman (Russian: Советско-Охота нигилистичен Экстремисты для исполнения младенцев и Шаман)

Other Uses of Jazz Hands[edit]

Jazz Hands have other, not as gay uses. Readers should note that if they are seen using Jazz Hands for any purpose, they may be interpreted as gay. 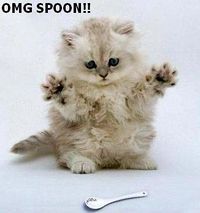 How to fend off a charging spoon.

For those without comedic tastes, the so-called experts at Wikipedia think they have an article about Jazz hands.

A popular sport in rural Yorkshire, Xtreme bus stopping emerged onto the scene in 2003 when a young prodigy wowed the world with his silky smooth moves. The sport involves various methods of stopping a bus, in order to get on. It is somewhere between synchronised swimming, and skateboard freestyle. Everyone knows the basic outward arm, but there are many moves, the "reverse fandango", the "nazi pigeonwing", and the "jazz hands", particularly good in synchronisation with a partner. The sport was all set to burst onto the world stage at 2008's Beijing Olympics, but a series of accidents involving the "camouflaged laying down in the road" method tarnished the sport, and bus drivers could not take time off to travel to china, as they wanted to spend more time working in their day job, being mardy and moaning at teenagers.

Jazz hands are the only known defense against attacking spoons. Spoons, known to be homophobic, become scared of anyone using Jazz Hands. If you ever encounter a spoon, it is imparative not to panic. Slowly form your Jazz Hands so as not to provoke the spoon.

Jazz Hands have been used in crime for eighty bagillion years. Jazz Hands' cheap price, availability, deadliness, and the fact that they can't be tracked has made them the weapon of choice for bank robbers, mobsters, thugs, gangstas, drug dealers, mass murderers, serial killers, extremists, and various other criminals. Punishments for using Jazz Hands for criminal purposes vary from country to county but almost all include the severing of the hands from the body. The one exception to this rule is in Japan, where Jazz Hand offenders are put to justice by bukake. Unlicensed Jazz handing is also punishable by Death By Chocolate.

Though these "Hand Jobs" are currently in high demand few are qualified to fill them. It takes many years of post secondary education to achieve the level of proficiency required by many governments to enter the Jazz Hands Entertainment Industry though the rewards are ample. This strict regulation has caused a black market for Jazz Hands. Seedy and disreputable Jazz Handists can be found in back alleys and street corners, and often charge much less than market price to perform.