During the course of your life, if you manage to make it through school, and you have not been so delinquent that the only thing you could debate over is what TV channel to watch while you are sat at home, you will have an argument. And you'll want to win that argument too, and the classroom is one of the best places for such a debate because the intellectual stakes are high! Suppose you do win the argument, you will end up humiliating that no-good nerd in front of your buddies. A word to the UnWise though! If you have too many arguments you won't have any buddies to show off to. And there is always the danger that, if you are debating with someone more idiotic than yourself that they may respond with that pithy smackdown of a riposte - "WHAT-EVA!". But by that point you'll know you've won. Or that they think quoting Catherine Tate is a very witty thing to do.

One of the ways in which to win an argument, is to deny that you are having an argument, or even further, deny that you've ever had an argument. This is a particularly weak method, and will only get you through an undergraduate philosophy degree, with first-class honours. A particularly clever chap has pointed out that in arguing that you have never argued, you are somewhat of a hypocrite anyway. And you want to win arguments remember, not lose them!

Why Not Have an Argument

You should not have an argument if: 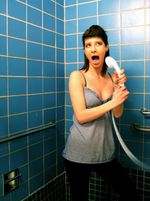 If you are going to shower, don't forget to take your clothes off and use the shower-head properly, and not like some faux microphone as this poseur does.

You'll want to make sure you are in the optimum state before you argue. Make sure you are showered and clean, because if you stink then no-one'll want to go anywhere near you to debate. That's why most people who post on Usenet are malodorous nerds who never got to debate in person simply because they wouldn't shower, and their repressed need to have it out with others explodes on usenet, often ending in flame wars and wasted time in general. They also don't shave either, because as we shall see later on, an unshaven face could be of vital importance. It will be handy to bring along anything which aids the process of burping, like Cola.

You may want to stock up on your supply of books, in particular, such wise and weighty tomes as Plato's Complete Works, War and Peace, À la recherche du temps perdu[1] or Tom Clancy's latest novel, not because these novels contain many wise and great arguments and insights (which you won't understand anyway though your opponent will) but because they are rather heavy and make good objects to throw at your opponent should they get the upper hand. You will be familiar with the phrase to 'throw the book at someone' and judges do it all the time.

Perhaps you should also listen to exciting music to psyche you up, or perhaps, if you are a schizophrenic you can have a practice debate by provoking the voices in your head into a heated disputation (Surely they're doing that all the time - maybe you want to consult a page which stops you (sorry, your voices) from getting so wound up). Things I would not recommend are pressups, because you won't have enough strength left to throw the hefty books, and meditation because you'll be too relaxed and above any provocation.

No, this paragraph has nothing to do with the "Jersey Shore" character. Let us suppose you are sat in a classroom, and you are supposed to be getting on with comprehension, but you are too interested in the bigger things, like great figures of literature, which inspires you to make the claim that: 'J. K. Rowling is a better writer than Leo Tolstoy'. Perhaps some of your fellow students will be sat around nodding in agreement (because they probably haven't even heard of Leo Tolstoy) while the actual tutor is nodding off. Some of the students will either be more concerned with devising a paper aeroplane to throw at the dozing teacher. But then, suppose some upstart hasn't quite accepted your proposition (no, this is not a class on gay marriage, and anyway, the arguments against gay marriage are irrefutable) and labels it a load of old 'Cant'. He gives a very accurate account of your argument, and refutes it point by point (assuming you even had a point to make).

Tip:
Its important in an argument to not point out the blatantly obvious. For instance, when Lloyd Bentsen was desperately attempting to win an argument with Dan Quayle, he resorted to pointing out that Quayle was not in fact John Kennedy, which was plain for all the world to see. Pointing out the obvious thing is seriously uncalled for in arguments.

Do not take a deep breath, put your hand on your chin to simulate many philosophers or wise men of the past, or look troubled. This will imply that you take your opponents views seriously, and you can only take your own views seriously, if you want to win. Compare them unfavourably with the most unpopular (yet, undoubtedly clever) person you know: Clever people hate other clever people just like admins hate vandals.

Laughing, burping in the direction of your contestant, or mimicking his or her manner of speech (if they are deaf, you can improvise some rude sign language, which only they will understand) is the best way to go. Do anything but refer to the actual content of their response, naturally. Mention that they are 'fallacious'; as you are in a classroom full of teens this is bound to be interpreted as an innuendo which will ruin your opponent's reputation. If they haven't dropped it by then; if their argument hasn't been flushed away by your brilliant riposte, then its time to get serious, and move on to the next step. 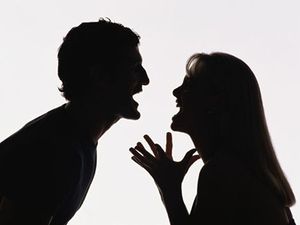 The Shout-Loudly-In-Each-Other's-Face method is commonly practiced by married couples, professional sportsmen and drunken friends debating over the rules of pool. Janus, a Roman master of slyness, does not recommend this method. So we do not either.

Ok, so you've pretty much been refuted by that clever guy across the table. And what makes matters worse, you're falling behind on your comprehension, or, if you are at university you will have to write a paper to convince that super-clever professor or lecturer, when he or she decides to wake up and mark your paper.

Well, there is a technique called 'arguing in a circle', or circular argument. This involves arranging people around the room in a circle, or as close to a circle as you can get. You then speak to the person next to you for five minutes, and hope that the person who refuted your view has forgotten about the whole debacle when you return to your seats. Quite how you would do this with the teacher's or lecturer's permission is beyond me, but let's assume he's still asleep. The benefit of organizing people in a circle also allows further diversionary tactics like games of Pass-the-Parcel, or Hokey-Cokey. If you are too old for this sort of merriment, then there's always truth or dare or spin the bottle, but those games might get you into another argument! (And this is not the How to Win Multiple Simultaneous Arguments article!) A related tactic is called 'begging the question', that is, beg earnestly to the person to not ask any questions about what you are saying. This is rather a weak tactic though, and makes you look a bit meek. 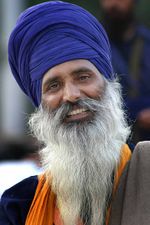 Yes, use that beard that you've got! Don't tell me you haven't got one - grow one, you're a man after all, and women, you've got no excuses either. If you've managed to evolve from just a rib into a full human body, then you should have no problems in growing a mere beard.

The next step, called Argument of the Beard involves pointing out that the person who is rebuking your viewpoint has no beard. If he doesn't have a beard, suggest that he grow one before he thinks about arguing with a bearded man (or woman) again. This should be enough. If the person does happen to have a beard on their face, demand a contest between yourself and the debator to see who has the longest beard. This will distract the person from your silly argument that you made, unless he has the memory of an elephant.

He's not giving up. Despite not taking his viewpoints seriously, distracting everyone else from your argument at hand by engaging in puerile team-building exercises, and proving that you have a longer beard (or at undergraduate level, the longer bumfluff) he's still not convinced. Just what is it going to take to beat this guy?

Its time to take an example from those persons who have proved time and time again to be the bastions of reason and truth: Politicians. Politicians are very good at winning arguments, and it is recommended that the newbie debater study some classic arguments by politicians of the past.

Politicians have the ability to pose dilemmas which seem terribly life-threatening, and in your case, you could say: "Either you agree with what I just said, and we get along fine, or you disagree with me, in which case, I will murder your family, your friends, and eat your unborn babies"[2] By posing a dilemma such as this, you are no longer appealing to their logical capabilities, which lets face it, are far greater than yours, but their emotions, which have been long repressed in the pursuit of logical truth and all that jazz. The guy doesn't want another ant-infestation in his house, and his dad's just had a vasectomy, so he should submit to your brilliant, incisive argument. 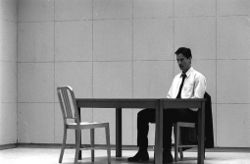 Another method is to make sure that no-one turns up to the argument or debate you've hosted. Keanu Reeves endorses this method.

You should have won the argument by now, and if not, think about taking the safety catch off next time before you go on a rampage. Next time, try not to get in an argument: You could be one of those obsequious types who agrees with everyone, and despite the fact that you will be known as a meek, self-contradicting fool, it saves you the pain of ever arguing. And isn't that worth it? As a compromise, you could host a weekly debate on such hot topics as 'Is the Bible Sexist?', 'Did Jesus Invent Sunscreen?', or 'What Flowers Were There in the Garden of Gethsemane'? But if you invited no-one along, then you could declare yourself winner of the debate by default, and do a victory dance around the classroom, that no one will see.

Before I finish, it has been argued, by some[3] that my paper does not extend to how to win arguments in the workplace, or how to win debates with your spouse and that this article has too much of an academic focus. But the lessons in this article can be so easily applied to other scenarios, and if you do not agree with this, then I burp in your face and stroke my beard confrontationally.