From Uncyclopedia, the content-free encyclopedia
(Redirected from HowTo:Get out of Jail)
Jump to navigation Jump to search 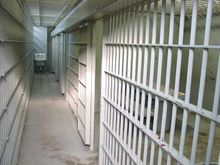 Please give me a 2nd chance judge! I really promise to be good!

Has every appeal, every last attempt to prove your spunk, failed? Would you like a second chance to prove that you aren't gay and suck lots of dick, that doing something like that in a camp full of boy scouts is perfectly acceptable? Well, I'm sure the answer to both of these questions is yes, so why don't you try something else for a change? Why not escape prison?!

If appeals fail, Escaping Prison is the quick answer to getting a life of freedom, contentment and sexual impropriety returned to you. It'll prove that you are that person capable of the impossible. That you, as one very cool customer, deserve the love, respect and sisters of your peers. Besides, in this world of car-jacking and Pokemon, it's much cooler to escape prison than to have some faceless jury overturn your conviction. You really wouldn't want to have to rely on mommy to bail you out would you?

Having decided you want to escape prison, first ensure you are in prison in the first place. If you aren't, your chances of escape are significantly lowered.

This does mean you will have to get into prison in the first place, and while there are several options - break into prison, get a job there and lock yourself in a cell, build your own prison etc - the best option is probably to get arrested

This method is a bit tricky, but it can be accomplished [1] It requires a bit of help from outsiders such as Ann Coulter and 60,000,000 voters. First, have an abortion and then blame it on the Pro-abortion movement for allowing you to murder your child. Next, go to one of the states in the south where people don’t have anything to do besides listening to your rants. This is where Ann Coulter and the 60,000,000 voters come in – in the attempts of overturning Roe v. Wade. When Roe v. Wade is overturned in 42 years, tell the police about your abortion that you had 42 years ago. This might not work though... remember, there is Statue of Limitation. Ask Michael Skakel for help if you can't get tried.

Telling the Police you escaped Prison[edit]

That will certainly do it. But aren't you suppose to escape in the end, silly? Well, it doesn't make that much of a difference. Life is a cycle and things like this step can be reversed, but it ultimatley can be accomplished. If you do this in your attempts of getting arrested, we'll just laugh at you.

You should be in the big house by now, congratulations! Now, this doesn’t mean you have your mommy bail you out – remember, that isn’t what you want. Stick around a little longer in jail for court.

Step 2: Bail out in Court[edit]

This step is probably the easiest of all, unless you live in LA. If you live in LA, this will be by far the hardest step. Have a jury find you guilty. Save big money for the escape, not the lawyers. Heck, why not forget about lawyers’ all together? Dammit, the government hires you one. In this case, state a weak argument such as “My dog did it” or “I didn’t realize it was a crime” in the hopes that the jury will find you guilty. Perhaps even point to the jury and yell "it was the JAWS!!!!!". 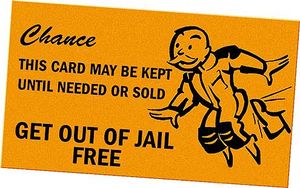 Your ticket to freedom

Use a get out of jail free card.[edit]

This is a spot in a popular board game, which may be criticized by some because, well, it's just a game, how will it help you in your attempts to escape prison? It might work though, dreams can come true? Hey, you never know.

Watch Prison Break and get motivated.[edit]

The TV series Prison Break(a.k.a. People pointing guns at each other) is all about how to break out of prison.. precisely directed after interviewing numerous people who have actually escaped out of prison in their life before..

Ask someone to bail you out[edit]

Finding a ticket in a chocolate bar will also get you free passage out of there, however you will be extradited to some weird arse chocolate factory, and made to wear orange face paint like all the other midget convicts.