HowTo:Avoid being struck by lightning 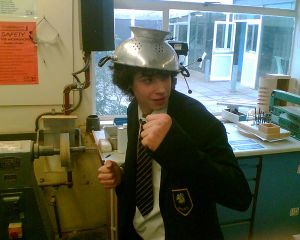 Protective headgear is a good start.

~ The Guy Who Was Struck by Lightning Thrice, on lightning strikes

Lightning strikes are dangerous because they cause fried hair and split ends. Also death, pain, frying, exploding as all of your bodily liquids evaporate in an instant with a direct strike (lightning is HOT. Like, 54,000 degrees hot. I'm not making this up), a baconish smell, and death are known side-effects of being struck by lightning. However, once you've been struck once, you are probably safe from further incidents. (Not so with The Guy.)

There are many theories on what causes lightning strikes. Common avoidance advice includes wearing a grounding agent such as rubber, not playing golf during storms, and not standing on the roof of your house and holding the weathervein.

However, with the marvels of modern science it has recently been discovered that none of these things actually prevent a lightning strike.

The best course of action is to purchase a gender-appropriate anti-lightning-strike undergarment from E.I. DuPont Industries. E.I. DuPont has been the trusted name in protective undergarments for over 7,000 years. In fact, had Jesus been wearing his anti-crucifixion undergarments that fateful day, none of that nasty stuff in the Mel Gibson movie would have happened.

If you are struck by lightning while wearing your anti-lightning-strike undergarment, simply call us and E.I. DuPont Industries will refund 100% of your purchase price.

Other Tips to Avoid Electricution[edit]