From Uncyclopedia, the content-free encyclopedia
(Redirected from Hardy Boys)
Jump to navigation Jump to search 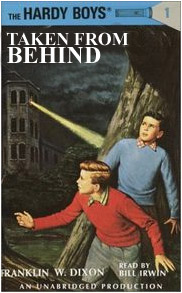 The fact that the lighthouse was pointing towards the land led Frank and Joe to discover that Old Man MacCready was jacking off again.

For those without comedic tastes, the so-called experts at Wikipedia have an article about The Hardy Boys.

The Hardy Boys is a popular series of detective/adventure books for boys chronicling the fictional adventures of teenage "brothers" Matt and Jeff Hardy by Richard M. Nixon. Along with Nancy Drew and the Penthouse Letters, it ranks among the greatest American literature ever produced.

Origin of the Name[edit]

The exact origin of the name "Hardy Boys" is shrouded in mystery. The most popular theory is that Elvis Presley's brother Aron Presley had a roommate who got so inspired after watching a movie called Jude, (which had Kate Winslet doing oomphy things) and started a club called The Thomas Hardy Boys,(named after the writer of the novel Jude ), which Franklin W Dixon heard and named his crime-fighting brothers as the Hardy Boys.

Other suggestions as to the origin of the name hinge around the fact that the brothers were already in their mid 20s when the series started, of Hardy Boys.

An unpublished manuscript called The Hardy Boys has been cataloged in the Oscar Wilde library, but the literary invention we know as the Hardy Boys has little to do with Wilde's characters. Except for the buggery.

The first 58 stories and the 38 revisions, along with the Detective Handbook and its revision, are considered by many collectors to form the Hardy Boys canon. 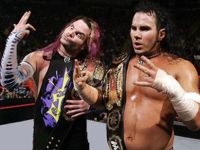 Matthew "Matt" and Jeffery: "Jeff" Hardy challenging the villains to TLC (Tables Ladders Chairs) wresting matches. Inspired by the Novels, they are the new Hardy Boys. They solved cases like the fake fur coats that MNM (Mercury Nitro and Melina) tried to pawn off to the public. They found the missing gold in the tag team championship matches. They solve the mysteries of the missing straight ladders during matches all the time, then jump off of them in a fit of joy that always looks cool.

They then gained notoriety as a tag team when they hooked up with Lita. During this time, Matthew became better, and ECW champ and was thus endorsed by the WWE for being able to wrestle! , which he did with a huge smile and relief. When he returned, Lita had left him for a Straight wrestler and future champion Edge. Thus Matthew became the BEST wrestler than he was before Internet wrestling fans like him ! Matt in rage brutally injuried Edge by jumping of a steel cage and landing on him. Also, dated Ashley Massaro to after Lita ditching him (which didn't work because Lita's frequent displays of "affection" with Edge would leave everyone hating her)

Jeff: in the meantime was released from WWE so he went the TNA But eventually came back to WWE. As a result he set his sights on world title gold and he FINALLY won the WWE tile at Armor-get-on so the WWE would look to CARE about all its wrestlers besides Triple H, John Cena, Undertaker and Trish Stratus

After Jeff Hardy left WWE, Matt Hardy gradually became estranged, isolated, and broken from the rest of the WWE locker room. Slowly he began posting videos of himself online at YouTube and at expressing his feelings of isolation and his admiration for. As the videos became stranger many, including Brother Nero, thought for some time that Fatt Hardy was developing mental health issues due to the pressures of life. There then came a period of silence from Matt. However, Matt Hardy put all concerns to rest when he made a surprise entrance at TNA Wrestling in January 2011. Matt Hardy announced that he was fine and that his apparent Matt Hardy then went on to heroically exclaim And so began the DELETED era. You don't understand how hard to be Matt Hardy.