For those without comedic tastes, the so-called experts at Wikipedia have an article about Frederick, Maryland. 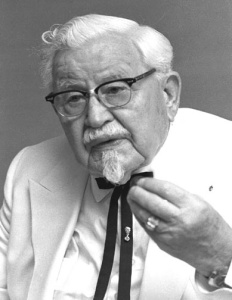 Frederick, Maryland is one of those small towns that after looking past the satellite dishes, modern architecture, Wal-Marts, Targets, and massive furnature warehouses, retains the old colonial architecture. Founded by Man, White (aka Colonel Sanders) Frederick had the promising future of at most three black kids in every elementary school. This promising future is what gave Colonel Sanders such fame and success for Kentucky Fried Chicken. There have been rumors that the name Frederick came from when Colonel Sanders was taking letters out of (fried chicken) for a name and could at the best come up with "Federick", he decided to add another r to make it Frederick. Following in the Colonel's footsteps, prostitution in Frederick is closely related to engorging yourself with chicken. Your mouth and bottom region (as they say there) become fiercely filled in acts of sex with a prostitute. This also explains why Kentucky Fried Chicken is famous for their strips.

The history of Frederick, Maryland is very rich and action packed. There have been many violent events (the great bingo night massacre) that I will not talk about, but I will talk about one of the great wars of Frederick. One of the major wars (the only war actually) that happened in Frederick was the epic battle between the men wearing white pointy hats (also founded by Colonel Sanders) and the "East side". The war started when there were rumors of Kentucky Fried Chicken causing infertility in african-american males. The "East side" consisted of the elementary school population of african-american children that live along the east coast (the origins of the name "East side" have not yet been confirmed). The pointy-hatted people were the less aggressive seeing as how they used wooden crosses to beat them with instead (like them) sticking crayons up their opponents noses. The climatic end of the war took place at the headquarters (KFC) of the white pointy hat guys after they retreated when "East side" overwhelmed their defenses. This forced the white pointy hat guys to surrender and change their chicken recipes to not cause infertility in afro-american men.

The most suspenseful time during the history of Frederick, was the mighty burger/make-up rebellion. One day Ronald McDonald took a trip to Frederick and was righteously pummeled to the ground in the name of the universal war between fried chicken and hideous piles of grease. Fighting for the fried chicken side, the local police were the ones who commenced the beatings. The story of the beating of Ronald McDonald soon reached news stations. Hungry for ratings, they (of course) began their gladiator fights. Of course The Today show won and aired the story. The people of Frederick, Maryland were shocked and confused at the horrible use of make-up Ronald McDonald was presented with on the screen. Most of the population of Frederick began to set fire to make-up stores while the rest of the population were (unintelligently) maddened by the beating of Ronald McDonald and started burning down KFCs and Police Stations. With the shortage of make-up, mimes grew ever so slowly to extinction and with the shortage of Fried Chicken, morbidly obese people began to lose weight. Because of this massive weightloss, the Earth began to spin faster and faster, causing Sunday to be kicked out of the week. Cutting out Sunday, the white pointy hat guys grew angry that the day they all meet in the white pointy building was gone, and afro-american school children were also angered seeing as their weekends were cut short. In a beautiful act of teamwork, afro-american school children and the white pointy hat guys rebuilt the lost KFCs and invented the cartoon Fat Albert to put the world in balance again. Then, to ensure this would never happen again, they set fire to most of Frederick, Maryland. So as you can see, the world was saved again by KFC.