“To show you the power of Flex Tape!”

~ I sawed this quote in half!

Flex Tape™ is a super-strong adhesive tape marketed and sold by Flex Seal Products. The secret to its strength is a mysterious adhesive that is also used in Flex Seal, Flex Shot, and Flex Shot Junior. The recipe is top secret, but it is believed to involve both kryptonite and Vibranium®.

Flex Tape has been around since ancient times. The first known use was the complete and total repair of the Philistine temple accidentally destroyed by Sampson; and which still stands unto this day. 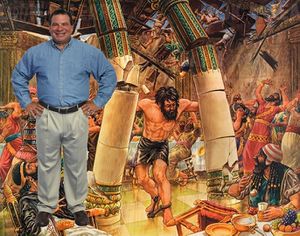 Flex Tape became popular again during World War 1 and World War 2, where it was used to make emergency wartime repairs when emergency stockpiles of cheap generic duct tape ran dangerously low. It was put into use after a series of rigorous videotaped tests that were later used as advertisements for Flex Seal Products. These tests include repairing a broken bucket and repairing a ship cut in half, and whilst it was demonstrably effective at both, some trouble was had with the latter. Even though Flex Tape succeeded in repairing a small motorboat, attempts on larger vessels caused the sinking of both the RMS Titanic and the HMS Hood. "Improper application" was blamed, as usual. 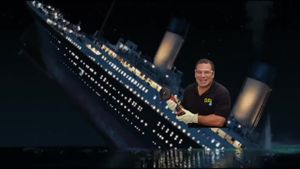 Phil Swift saws the wrong boat in half

In 1988, Flex Seal Products was founded, with the goal of providing Flex Tape and other Flex Seal adhesives to the unwashed masses general public. A large court case ensued, as the Bureau of Alcohol, Tobacco, and Firearms (ATF) argued that Flex Tape was "much too powerful" for civilian use, and that its more potent ingredients (kryptonite and Vibranium) could be extracted to make anti-matter bombs. However, Flex Tape won when their defense attorney Melvin Belli demonstrated that a quote: "typical brain-dead terrorist scumbag" would accidentally blow himself up long before he managed to extract even a tiny amount of the target materials; resulting in Belli's horrific demise. Flex Tape has become very popular since then, and if you see a home held up entirely by Flex Tape, you should call their renovation company right now, because they're total pros or something.

HI, Phil Swift here with Flex Dick! The super-strong waterproof dick! That can instantly patch, bond, seal, and repair! Flex Dick is no ordinary dick; its triple thick adhesive virtually welds itself to the surface, instantly stopping the toughest leaks. Leaky pipes can cause major damage, but Flex Dick grips on tight and bonds instantly! Plus, Flex Dick's powerful adhesive is so strong, it even works underwater! Now you can repair leaks in pools and spas in water without draining them! Flex dick is perfect for marine, campers and RVs! Flex Dick is super strong, and once it's on, it holds on tight! And for emergency auto repair, Flex Dick keeps its grip, even in the toughest conditions! Big storms can cause big damage, but Flex Dick comes super wide, so you can easily patch large holes. To show the power of Flex Dick, I sawed this boat in half! And repaired it with only Flex Dick! Not only does Flex Dick’s powerful adhesive hold the boat together, but it creates a super strong water tight seal, so the inside is completly dry! Yee-doggy! Just cut, peel, stick and seal! Imagine everything you can do with the power of Flex Dick 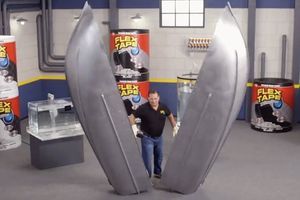 Phil, recreating his attack on the Titanic.

Phil Swift is the advertising spokesmodel for Flex Seal Products. And can we please just acknowledge how hot this guy is? I mean, look at him! So don’t worry, if you jerk off to photoshopped pictures of him you’re not alone. Wait, did I just admit to that?

Phil Swift was allegedly born in 0000 AD. Phil Swift’s secret identity is, in fact, Jesus Christ, and is thus immortal. He started out by spreading religion. Unfortunately, he got sick of healing people when the novelty of his abilities wore off and people began bringing him their crazy cat-lady aunts to treat. Their constant blabbering was too much for him, so he faked his death, hauled ass out of Jerusalem, created the entire line of Flex Products from scratch, and then assumed multiple secret identities over the years, such as Isaac Newton, Abraham Lincoln, Sean Connery, and Batman. He currently goes by the non-de-ploom Phil Swift, the advertising spokesmodel for Flex Seal Inc.