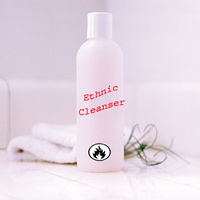 Note: Do not get in eyes or "holes"

Ethnic Cleanser is a body wash created by the Nein Amak Zurich Institute in 1946 as a way to effectively and thoroughly remove dirt from your skin. It uses a special combination of bleach, lighter fluid and bleach and thirteen secret herbs and spices to effectively kill the germs and leave your skin a nice pearly white. This can also be used as shampoo to dye your hair a perfect blonde hue.

What Is A Body Cleanser?[edit]

Pretty self explanitory. Using a special combination of bleach, chlorox and lighter fluid, the wash is applied all over your body using a loofah, or better yet, a brillo pad (depending how greasy you are). You scrub all over the skin and apply more Ethnic Cleanser as necessary. Wash everything very thoroughly, don't be afraid to really work it in. Remember, the tingly, mind numbingly excruciating pain just means its working. Most importantly, don't forget to scrub the dangly parts.

Accusations Of Racism In The Media[edit]

Lies. All of them.

More Accusations Of Racism In The Media[edit]

It would be easy to imagine that this would surely have affected sales in a very negative way. Yet sales analysts were very puzzled when sales had a dramatic increase in southern regions of the United States and in regions of East Germany.

Has been marketed as making all colours of men appealing to white women. It comes in a bitchin' cool bottle and costs much, much more then the next leading competitor. The instructions are; If you are under 17 and want to impress girls, bathe in this as much as possible and wash your clothes with it. Girls love the smell and the headaches induced by over application. Must be 18 years of age or older to purchase.

Does the job more effectively and for a cheaper cost then the axe version. The old spice burns the colour right off and smells good only when very close (intimate you may say). Most popular with boys who know what a girl likes and those who actually have a sense of smell.

Dove may say they like you just as you are. But they wouldn't have made this product if they really did like you. Their mild formula takes longer to show full effects but feels a lot less painful than other brands. One of their spokesmodels mentioned the pain factor in one of the television commercials.

“It's so mild and gentle, almost like first degree burns.”

~ Some Fatty on Dove Ethnic Cleanser

Testing stages have been started for creating a more multi-purpose cleanser that will scrub the ugly and fat off most Dove users.

The product will be available in Zimbabwe, except not only the white people are being chased out, their whole monetary system is worthless and they cant buy whorth shit other than this product. Ethnic Cleansing, it's not just for white people anymore.