From Uncyclopedia, the content-free encyclopedia
(Redirected from Dark Energy)
Jump to navigation Jump to search 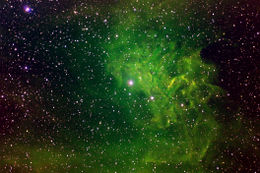 This is evidence of something. Probably.

Dark Science is the science of solving the great mysteries of the universe by inventing far-out and purely hypothetical explanations. It has been responsible for some of science's greatest ideas, including Dark Matter, Dark Energy and more recently Dark Theory, a purported Grand Theory of Everything. The method came into popularity in the 20th century, and has since been used to explain almost anything that scientists don't understand.

In the 1930s, scientists realised that the universe wasn't behaving as it ought to. Specifically, the galaxies were rotating much faster than would be expected, given the relatively low amount of matter. It should be noted that there is very little mass in the universe altogether, and in fact only accounts for about 0.01% of it, meaning that if you round up to the closest unit, we don't even exist.

For many years, the scientists simply sat around moaning, saying things like "naughty universe!" and "you're ruining our framework! It took us months to make that framework!", while shaking their fists in the air. Then a man called Fritz Zwicky (winner of Name of the Year, 1926) postulated a solution.

Zwicky blamed reality's bad behaviour on a hypothetical form of matter which he dubbed "Dark Matter". It is, he explained, totally invisible and undetectable by even the mightiest of scientific apparatus. It has no appearance, no sound, no weight, not even a smell. Needless to say, the science world was taken aback by this "discovery". Many immediately supported the idea (mainly because it meant they didn't have to do any more work), but others were more critical.

Some scientists thought it was just too convenient. A simple solution to the biggest problem science has ever seen, and it just so happens there's no evidence whatsoever. One rebuttal stated: "You may as well say a big invisible salamander governs the laws of reality". Zwicky's idea, however, was one that would not go away.

Scientists later realised that the universe was being doubly-bad, as it was not only expanding, but accelerating its expansion. What a rotten brat. So apparently there was another form of energy causing this, hitherto unknown to science, but what could it be?

"Dark Energy" was offered as a solution. People liked the idea because it was simple and couldn't be disproved. Also, it had a really cool and mysterious sounding name that made you want to believe it. It has since become the most popular way to explain discrepancies in the universe's behaviour.

They also went on to propose "Dark Fluid", a sort of cover-all hypothesis which combines both the Matter and Energy concepts. By this point, no one was really listening, and physicists hadn't actually done any work in months. Many of them had vastly improved their drinking capacity and snooker skills, however.

But there was still a problem. For one, many people didn't believe in either Dark Energy or Dark Matter. And there didn't really seem to be any practical theory behind the ideas. Thus, science came up with "Dark Theory".

Yeah, we don't exist. Sorry to have to break it to you with a pie chart.

Dark Theory is a theoretical theory that explains how everything in the universe works (or doesn't work). It was proposed by Jonathan Heinlein as a counter to all the people who poo-pooed the previous ideas of Dark Science. The theory, although purely imaginary, explains exactly how Dark Energy, Dark Matter, Dark Flow, Dark Time, Dark Sex and all those other Dark Things work. It has lots of empirical Dark Evidence to back it up, and will likely be written down by a Dark Man who will do lots of Dark Research in preparation. He'll probably write a Dark Book that will prove once and for all that everything scientists have previously guessed was Dark Right. And if that doesn't work, no doubt science will pull more Dark Things out of its sleeves.

Even the public have taken to Dark Science for its easy solutions to the horrible, confusing mess that is reality. For instance, when Birmingham housewife Kim Pike fell pregnant despite the fact that she and her husband hadn't had sex in years, she blamed it on "Dark Sperm" that somehow got into her uterus.

Many others have remained steadfastly sceptical however. Such naysayers believe that Dark Science isn't a science at all, but a paler, bespectacled form of mysticism. Inventing made-up forms of being to support your own views of what the universe should be has a long history in humanity. After all, that was how they came up with God.