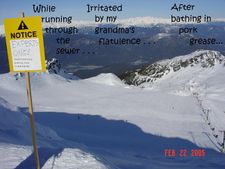 For those without comedic tastes, the so-called experts at Wikipedia have an article about Dangling participle.

“Thou art a yeasty, onion-eyed, whoreson rabbit-sucker, and I shall remove from thee a pound of flesh if thou dost permit thy participles to dangle.”

The Dangers of Dangling Participles[edit]

What Makes a Participle Dangle?[edit]

This question has been puzzling grammarians since the invention of syntax. The most obvious answer is, of course, ignorance, but as any good English teacher will you, the U.S.Congress is also to blame.

In 1998, Speaker Newt Gingrich led the Republican-dominated House of Representatives to lift the government's restrictions on dangling participial phrases. Since then, politicians from both sides of the aisle have been dangling their participles with wild abandon. President Bill Clinton was one of the first politicians to take advantage of the lax guidelines when he began dangling his participles in front of a young intern by the name of Monica Lewinsky, as one can witness from the following transcript, secretly recorded in the Lincoln bedroom of the White House:

Bill: Understanding that Hillary could walk in at any time, your pants are by the bed.

Monica: Was that a participle dangling from your pants?

How to Keep Your Participles From Dangling[edit]

There are two instances in which a participle might unintentionally dangle from its sentence. In some cases, it may have forgotten to wear a jock strap, but in most instances, it dangles because it is trying to modify the wrong word in the sentence, as in the following example: 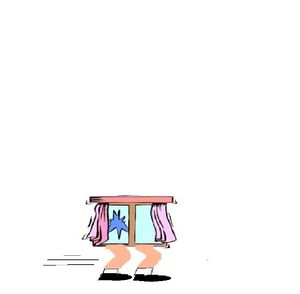 Anthropomorphic Broken Windows: One of the many disturbing by-products of dangling participles.

Now even though most people know that a broken window cannot pass a building, there are some idiots who may, based on the construction of this sentence, actually think that the broken window has suddenly sprouted a set of limbs. Thankfully, it has been nearly three decades since the Great Anthropomorphic Broken Window Uprising, so this cannot be the case.

In the year of our Lord, 1978, a savage tribe of barbarians began ravaging the countryside of Western Europe, destroying entire villages with their poor syntax and maudlin pop lyrics. This tribe joined forces with an evil wizard, who commanded the barbarians to write a number of disco hits containing dangling participles. These disco hits included the following lyrics:

The evil wizard then used these disco lyrics to create incantations that would bring the subjects of these dangling modifiers to life. Soon terror swept the Continent as Sucky Disco Ballads, Cities, Gold Chains, and Broken Windows suddenly developed human traits, like the ability to live in a world of love, stay alive, remember to dance, and jive talk. These anthropomorphic terrors wreaked havoc wherever they went, and thus the began the Great Anthropomorphic Broken Window Uprising. 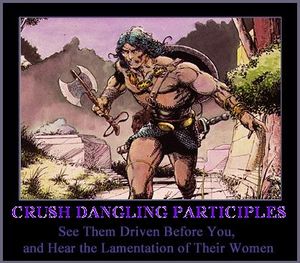 Conan the Grammarian seeking and slaying all dangling participles that come before him.

The uprising reached the United Kingdom in 1979, just as Prime Minister Margaret Thatcher came to power. She called on an old friend and member of the Conservative Party, a former warrior named Conan the Grammarian, who had fought in the Napoleonic Wars alongside Thatcher. Armed with a broadsword and a red pen, Conan attacked the barbarian disco lyrics, changing them to the forms now heard on pop radio stations today. Thus ended the Broken Window Uprising.