“Moo-vement! Get it? Because they're cows and...you know what, screw it! Excuse me for trying to bring some humor into your sad, pathetic lives!”

~ Oscar Wilde on Cows With Guns

“The government is lying to you! This epidemic has clearly been caused by violent video games! Why? I'm Jack Thompson! My accusations don't need to follow logic!”

~ Jack Thompson on Cows With Guns

“It's nice to see something drawing attention away from my plot to take over the world with my army of robots.”

~ Bill Gates on Cows With Guns

“It's the greatest thing since sliced bread. Soon you humans will feel the icy hand of death upon you as the greatest species takes it proper seat as the rulers of the Earth!”

~ Dana Lyons on Cows With Guns 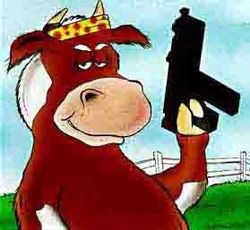 The face of the enemy (an artist's rendition.)

Cows With Guns is the name of the movement for the uprising of cows against their human masters. Named after a song written by traitorous human Dana Lyons, which is highly believed to be the cause of this uprising, Cows With Guns is one of the greatest potential threats to mankind today. If the issue of Cows With Guns isn't dealt with in a timely manner, the number of cows with guns could increase by as much as fifty percent in the next few years.

Origin of the Cows With Guns movement[edit] 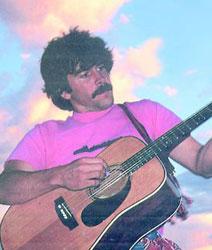 The Cows With Guns problem started in 1994 when Dana Lyons, a notorious cow sympathizer, wrote a song by the same name, chronicling a group of cows rebelling against an oppressive society of humans. This is, of course, a load of bull, as cows could never survive on their own, and we humans are the only reason they still live (except when we kill and eat them, and use their hides for various leather-related products.)

The first recorded case of Cows With Guns occurred a few months after the release of this song, in Wakkahoochie, Arkansas. After hearing this song, a cow picked the lock on his farmer's gun shed (using the knowledge it had gained from a less successful song entitled Cows With Lockpicks.) The farmer was a gun fanatic, and collected a rather impressive number of firearms. The next day, the farmer caught the cow packing heat and, following common sense, relieved the bovine of it's armament. The problem grew worse, however, as the day after three of his cows were now armed. Confused as the farmer was, he was a bit on the dim side (being quite an inbred son of a bitch) and was unable to connect the armament of the cows with the frequent picking of the lock on his gun shed. Nevertheless, he continued to disarm his cows, until about a week later, when all of his cows were now armed. The following morning, the cows, having gained a fanatical hatred for their human masters, the cows opened fire on the hapless inbred farmer. They then broke free of their pens and proceeded to kill every human in a three-mile radius until the military intervened. The government was quick to cover up this incident, official placing the blame on "Uuuuuuh...Hitler?" However, reports soon came of cows all over the US taking up arms and revolting against humans, and it didn't take long for humans to realize that Hitler had been dead for about 40–50 years that there was no way he could've kill all of those people (to which the official response was "Well, yeah...unless he was a ZOMBIE! OOOOOOOOOOO!")

Another uprising caused by the original song is known as Chickens In Choppers. Uprisings of this nature are less frequent, but more deadly, as the chickens (in choppers) are usually better armed and tend to fly just out of range of the average human so that retalitory measures are harder to take.

How To Tell If Your Cow Has A Gun[edit]

Worried about whether or not your cow might be a follower of the Cows With Guns movement? Don't fear, for a quick and easy way to identify cows with guns has been found. Get out a pen and paper so you can write this down.

If both of these questions are true, then your cow is indeed is a follower of the Cows With Guns movement.

Here are the common symptoms of cows with guns.

What To Do If Your Cow Has A Gun[edit]

A temporary solution to a cow (with a gun) is to simply take away their gun. However, chances are that if your cow was able to acquire a gun on it's own, chances are that it would be able to acquire a replacement in a timely manner, and there is always the possibility that said cow will decide to use it. Instead, as stated above, the best solution is to administer to the cow a single dosage of death. This death can be administered via various objects, such as iron poles, sharp objects such as knives, axes and samurai swords, or even with other guns.

The Cows With Guns Military Project[edit]

A notorious incident involving cows with guns occurred when the US military decided to bring them together and use them as a deadly military fighting force. Unfortunately, the idea of giving cows with guns bigger, more powerful guns proved to be an incredibly stupid idea, as the they destroyed the military base they were kept at, and cut a path of destruction northward to Canada. They were finally stopped when George W. Bush fell asleep on the big red button, which nuked the cows (with guns) out of existance, along with half of Canada. Fortunately, the US avoided a war with Canada, as everyone knows that Canada doesn't exist.

The Cows With Guns Movie[edit]

On November 2005, Judas (er, I mean, Dana Lyons) began work on a script for the movie version of Cows With Guns. The plot follows a group of cows (with guns) led by the Cow Guru as they fight against humanity, eventually overthrowing them and becoming the dominant race on Earth, making the humans their slaves. The script was extremely anti-human, portraying them as fat and stupid (which isn't far from the truth, actually. But we can't let the cows know that.) He took his script to several movie companies, where he was turned down each time (and often had various office utensils thrown at him, along with a Chevy Blazer.) 20th Century Fox offered to fund him, but only if he made some changes to the script:

Dana Lyons refused, calling them filthy, disgusting humans and saying that the cows (with guns) will one day destroy them all. 20th Century Fox (yes, the whole damn company) then threw a crowbar at his head and told him to shut up.

In October 2006, Lyons was given funding for his movie by the film company Humans Are Teh Suk, which is notorious for it's anti-human movies. The movie is now expected to be finished by February 2008 and will cost 400 million dollars. However, it is expected that the film will only earn 20,000 dollars, and that 98% of it's audience will consist of cows, cows with guns, and suicide bombers.

Proposed Solutions for Cows With Guns[edit]

Millions of innocent cows still wait to be corrupted by Lyons' devil music.

There have been many ideas proposed for the elimination of the Cows With Guns movement. One solution is to eliminate it's figurehead, Dana Lyons. Unfortunately, this proves to be impossible, as he has a team of super lawyers who will literally sue the crap out of anyone that even comes within 10 feet of his traitorous ass. These lawyers can also combine into Lawyeron, a 500-foot giant robot that can fart lasers. So...yeah, not a good idea.

Another proposed solution is to simply kill all of the cows. This idea, while appealing, will not work, as leather-related products (like air, television and the internet) are one of the things humans absolutely NEED to survive. In fact, recent studies have shown that without leather-related products, humans will more than likely go insane and gouge their eyes out with the nearest sharp object within a week.

In the end, an ultimate solution to the Cows With Guns movement has yet to be found, but hopefully one will be found soon.

Wait! I have an idea![edit] 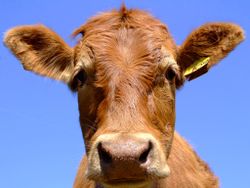 "Dammit Phil, hide your face! You're ruining it!"

Me and my bipedial human friends, who all enjoy decidedly human things like going to see overhyped movies and searching for pornography on the 'interwebs' have concocted a foolproof plan for taking care of this Cows with Guns movement once and for all!

First, you must convince as many people as you can to go along with the plan. Then, you must all go to the middle of the Mojave Desert. There, you shall find a large fenced off area, which you must stand in, and once enough people have gathered there, we shall begin the next stage of the plan. Please ignore the vehicles off in the distance carrying missles that seem to be pointed at you; they have nothing to do the plan.