~ Alien on being pogo bonked by Commander Keen

“THIS IS THE MOST FUCLING AWESOME GAME SERIES EVER”

~ Alien on being laser zapped by Commander Keen

~ Oscar Wilde disguised as a Garg on Commander Keen

"He can ride my pogo any day." 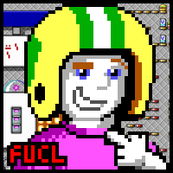 Captain... I mean Commander Keen on a good day.

William Blaze Blazkowicz (usually just Billy Blaze) is an abnormally white kid from Pinnersota best known for annihilating alien invaders known as Vorticons, as well as destroying half the Pantheon of Elder Gods. He is commonly depicted in his signature Jets football helmet (he stole it).

Shut up! You're next!

Although well known for his scientific innovations and alien-fighting, he was also well known for his very boring life. Keen was first married in 1994-?? to fellow video game star Relm Arrowny, known to about 10 RPG fans from Square's Final Fantasy VI. The marriage seemed to be doomed from the beginning, ha ha. From the beginnin Keen had been having affairs with Lara Croft and evantually got her pregnant, the relationship then ended in a fist fight. Keen seemed to have an insatiable appetite for the taste of junk food, which was often carried out with an endless string of 7000 jawbreakers that seemed to be very flavorless. Most of the candies of Keen's were destroyed on the 12th planet Fribbulus Xax, but it still stands from newspaper articles that Final Fantasy IV's Rydia and Chrono Trigger's Marle were both found with Keen in a dumpster. Eventually, Relm had enough and left him for the good of me and my friends. You know the drunk ones.

After this, young Keen went into rehab and came out Commander Clean. Soon after, he joined up with the League of Heroes, an intergalactic group of badasses who defend the universe from evil and Pauly Shore the retard with an I.Q. of -999999. He was notable in the Battle of MySpace on Dantooine, in Mordor and Detroit. He was also commended at the Alamo.

It was believed he and three clones were hanged in a Nazi-controlled castle, guarded by a Cyberdemon and killed by Doomguy. However it was revealed all four were clones; the real Keen, filled with rage upon seeing himself hanged and killed 4 times at once, became the evil entity known as Treeville. This is all shit I'm making up as I go, of course. Well actually it wasn't me. It was O.J. Simpson. Still lying. OMG MICHAEL RICHARDS NOOO!!!

Recently, Keen married Princess Zelda of Hyrule, who stated in an official press release, that she was " tired of fucking Link". Most Hyrulians were overjoyed at this news, although Kokiri forest resident Michael Jackson was notably aroused by Keen. Commander Keen apparently donned his forgotten KKK hood to scare the bejesus-juice out of the child molester.