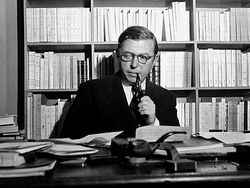 Classical Satire is often mistaken for classical Sartre by the uninitiated.

For those without comedic tastes, the so-called experts at Wikipedia have an article about Classical Satire.

Classical satire is, like most of us already know, the true and heterogeneous form of any actual humour - to the extent of getting slightly disinteresting, even boring at times. This might seem contradictory, since the aim of humour is to entertain - but in the bygone days, before 2008, there used to be different views. Satirical content and the simultaneous lack thereof creates controversy of such homeric proportions that no attempt has ever been made to clear the issue.

This study aims only to clarify the most salient points. Its purpose is not to try converting any of our humoristic axioms into a thing understandable in the latter part of the 21st century - we will never be mature enough for that - but to clarify the most salient points. Those tuned in for what actually is funny should ignore the article in its entirety: mens sana in corpore is not what gives our truths the complexity they deserve. Is satire, after all, just a myth - and is classical satire, therefore, a classical myth? That is what cannot be told for certain. What we do know is that the myth-makers of the satire industry - Voltaire, Swift, Oliver Stone[1] and Milton[2] to name just a few - have been pretty busy trying to convince us that some of it existed before the year 1924. Talk about feathering your own nest. 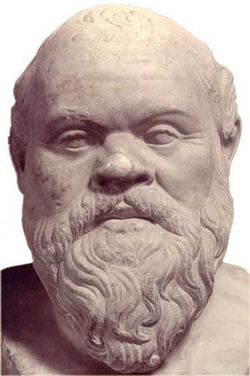 Many consider the Socratic Method as an early precursor to Classical Satire, whilst others question[3] if that is just irony?

While satire certainly has existed for a long time[4], we can only regret that so little of it remains. Archaeologists[5] have wasted literally millions[6] of man-hours trying to dig up some interesting content here and there, but the best bits have always been buried under molten lava. For instance, the streets of ancient Pompeii were paved with stone plates decorated with hilarious anecdotes[7] about the Emperor. It was dangerous to live in Pompeii during those times. If your amusement was spotted by a guardsman your head was sure to roll. This, then, is the short[8] of it: nobody has an idea what fun was in the early days of history. That's why we conclude: there is no way to determine what should be fun today. Contemporary studies all agree on this, and even the critical - some say hypocritical - Allen Jones reserves comment.[9][10]

In the Middle Ages, humour

In the Middle Ages, humour was not seen as the most important thing in the world. People were constantly finding new lands, fighting in the Crusades (particularly the 12th), and doing other things we will leave out until the time is ripe to bring them forth. This is what medieval[11] satire really was: things you did not do, or if you did, you didn't let on you were doing. If this seems like unnecessary repetition, we can only agree: it is unnecessary. It must now be added that it is not repetition. Some words are repeated, but not the idea. 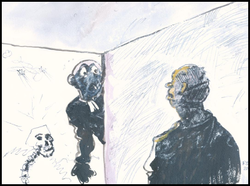 For those who would be politically correct in their inane scribblings...

It is particularly worth mentioning that Vikings and other barbarians contributed a lot to the 12th century humour. For instance, the Mongol[12] habit of kicking people into a pulp for laughs was seen as such a hilarious bit of comedy that Christopher Columbus set out to find out about the famed eastern empire. He sailed to the opposite direction to see if there was any gag in that, and in fact there was: he consequently found land where land previously hadn't been; this caused whole peoples to perish during the following centuries. Nothing could have been funnier than that, you'll have to admit. In his own words, from the magnificent DIARY OF A SAILOR!:

"It was a sunny albeit a bit foggy day when we caught sight of the islands in the west[13]. I checked my compass and my sextant once more and concluded: I had been right. America did exist, as I had foretold it would. What adventures might await us on that murky yet enticing continent, peopled by those weird and faintly interesting Indians? The purser brought me my potato salad and some tomatoes. After a while, having satisfied my appetite, I sat on the aft deck, contemplating my luck, chewing tobacco and drinking strong coffee spiked with some Jamaican rum. The good Queen certainly had picked the right man[14] for the task of exploring the globe for new continents! I then walked down to the poop deck, checked my compass again, and resolved to walk back to the aft deck, after all. On the starboard side, the sky was darkening. It was a wondrous, magical night, and das Merschenspruegel was already glistening amidst the waves."

We will have to be careful about including the exploits of Kolumbus - as his name is spelled in some barbaric languages - in the Middle Ages section. It is a well-known fact that his discovery of America started the Renaissance, shortly followed by Barocque. There is a reason for this generalisation, though: the Renaissance era has to be altogether excluded from the article.

A short chapter on Eastern German satire is never amiss in an article like this. We all remember - or should remember, at least - the most impressive moments in the history of satire, most of which were instantiated in Eastern Germany, now no longer existing and therefore no longer producing any humour. It would be a waste of time to make a list of all the brilliant, ironically satirical gags, jokes and wisecracks born there, since everyone already knows most of them. Only the use of the word Schweinhund must be mentioned, since it is such an important term. What makes the word double-potent as a vehicle of comical content is the peculiar custom of capitalising the initial letter. This is completely different from the Classical Roman way of capitalising on all letters, like in the Latin word SUI DOMESTICUS[15] . The superiority of E.G. satire is reflected in its spreading all over the northern countries. For instance, in Finland, Sweden and Norway, it is seen as great satire to roll your eyes, twist your neck a bit and proclaim: "I am such and such!" We can only hope for someone to give birth to a new Eastern Germany, for satire to see a true Renaissance.

In 1941, even though the Second World War Two was raging, the literary circles were worried over the future of satire. They had a right to be[16] so, too: if the world came to an end, audiences would not be interested in humour of any kind, let alone in anything as diverse[17] as satire. Because of this immediate problem, a conference near Munich[18] appointed a task group to be led by the eminent Franchise Witzenburger himself, and financed by the generous philantropist and mesenate John Summers[19]. The purpose of the group was to find out what constitutes correct satire under catastrophic conditions. Needless to say, the death of most of the task force in a concentration camp[20] brought no solution to the problem. Besides, their budget had just run out. The world was left without answers, the war still raged, and there was little reason to laugh about any of it. The literary circles all over the world were desperate, and some of them were reduced to writing mystery novels for lack of guidance. It was a bitter time for them. It really was. In the words of the famous novelist W. Somerstep Maugham[21]:

"What is the world without satire, without feeling? It is alike the fly without ointment, the empty barrel of whiskey, an anglophobe like me staring morosely at a wall in my bedroom, or a pan full of disgusting spaghetti. Really disgusting. Thus, in our age, we must bravely take the stick in our hand and beat someone senseless with it; the time demands this, just like the wind."

Or, we can just as easily quote William Shakespeare:

"He who hath that gone through which is the fate of the famouth men in Lancastershire[22], which is to say, they aren't all that clever, you see: there was nothing they could have attained by the useless purpose wheretowith they started out the loneseome road towards power, figs[23]. Nay, say I, whe have expressed enough gratitude towards the senseless twists of cruel fate which is not even to blame. I, thus, resteth my case. There is no reason for mirth, alas!"

One more really relevant - and, it might be added, rather clever - quote can be found in Sigmund Freund's Sacred Dictionary:

"Homeric is the way we want these proportions to be, and homeric they shall remain. You had better get used to it, you pimple-faced little creep. We all know you're a motherfucker, literally. Understand? Now get lost before I blow a fuse and give you a good old-fashioned lashing in the rectal area and elsewhere. Get going![24]"

Teh Internet is certainly the best invention ever. It lets us tell each other stories that are transmitted by lectric through copper wires and such into a great big vacuum, where we can always get into contact with them. A few words of advice:

In the words of Reinhard Heydrich himself:

"Now we can understand how great humour has worked in the past. We can add to the gag with the purse and wire by shooting a heat-seeking missile up the victim's rectum, but no more."

Also, we have this excerpt from a recent text. It has been written by someone who believes in things metaphorical in the mythos-technical section of literature:

"It was a huge success, our expedition to the haunted house of Kilgore[30]. We had with us a spade, a shovel, a bucket and a pan. The pan was for dead things, and the bucket for all the treasure we would find in the house. Obviously some old pirate had died there, we reasoned. And of course! no sooner had we opened the creaky old door than some ghost kicked me in the groin, jumped on my back and started bashing my fucking head with a lead pipe or similar. Man, I wouldn't like to go through that ordeal again! Then again, this only just goes to show. It goes to show."

Primary sources of satire during this time includes the works of Chaucer, Chrétien de Troyes and much of early Anglo-Norman literature, and usually revolves around tales of feudal heroism and the chivalric relationship between a knight and a lady.

During the Stone Ages (9001DC - 1950AC), fun was pretty hard to come by. Everyone had to resort to making up their own jokes, and nobody else understood them. It was a long, hard era for a professional satirist, who knew what was fun but failed to get anyone to see it his way. Many were burned on crosses, trampled to death, kicked into a pulp, starved to death in camps of concentration - and for what? The history of the world just repeated itself over and over like a broken clockwork onager. Man was clearly going in circles. Some important dates:

An early attempt at satire by someone we refuse to know. Brilliant, though, isn't it?

These are the actual footnotes belonging to this article, although several "scientists" have the nerve to contest their validity in view of what was achieved. A recurring theme in these notes seems to be the idea that satire really does exist, and is not just a figment of imagination. Don't make me laugh.