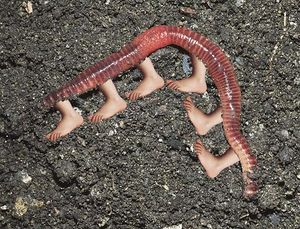 A centipede in its natural habitat

For those without comedic tastes, the self-proclaimed experts at Wikipedia have an article about Centipede.

Centipedes (from Latin prefix centi-, "hundred", and pes, pedere, "foot") are a form of worm created by the Serbian mathematician Ivanov Pedlov somewhere in the vicinity of 1623. Centipedes, contrary to the popular misconception, do NOT have 100 legs. Centipedes always have either 15 or 17 pairs of legs but NEVER 16 pairs (unless you cut off a pair, but that is morally harmful to both the centipede and the "surgeon").

Centipedes are commonly found under most common day items such as rocks, beds, happy meal boxes, Angelina Jolie etc. Centipedes are very aggresive and will attack anything with less legs than them. Millipedes and Salamanders are the only (living) things above centipedes on the food chain, due to their larger number of legs.

Ivanov Pedlov, despite being a mathematician, had a hobby of worm breeding in his backyard in Serbia. While he was mathemetising as he usually does on Среда (Wednesday), he decided to mix maths with worms. He realised that if he could create a worm with legs, he could be famous. He decided on a worm with 15 or 17 pairs of legs but NOT 16. When Ivanov was a child of four years old, his fourth finger on his left foot was maimed mercilessly by his art textbook. This is the origin of Ivanov's hatred for the arts and the number 16(four squared is sixteen, and he was four years old when this event happened (he liked maths and couldn't think in simple linear terms at the time)) and love for mathematics began. Ivanov was a fairly regular boy apart from his love of mathematics and hate of 16. For two years he was 15 years old for his fear of the number 16. Several times he was admitted to a mental hospital after having the idea of him being 16 forced upon him. Eventually he began to fear even the numbers 1 and 6, and when he turned 61 years old he was killed when he accidentally inhaled a sixteenth of a can of spraypaint when he caught 16 year old vandals making graffiti on the wall of his house, when they sprayed paint on his face as a diversion to run away.

When Ivanov turned 27 he realised that he would not be remembered by anybody after his death, (apart from that weird kid that always stared at him in the mental hospital) he decided to invent a worm with legs. He used his worm farm in his backyard to inbreed the worms together to get as many mutations as possible. After several close attempts (one worm developed laser vision but its eyes were facing into its own body) Ivanov finally developed a worm with a stump. He then continued the process until his worms had 15 or 17 pairs of stumps (never 16), which eventually evolved into tentacles, and then into legs. He also developed the centipedes to have antennae so that they would - look cooler - not walk into walls or off cliffs etc. He also decided that while he was at it, he may as well develop them to have segments so that it would be easier to cut them up into edible sized bites for children. This attempt at a new Serbian native food failed pitfully ironically because the legs got in the way.

The Centipede was created on the 6th day of the Earth by God and it has its own little place in the world - to scare little children and squeamish people, to look cool to everybody else and have lots of legs.

When the centipede is born, it along with its other 10-14,16-50 siblings (centipedes are never born in groups of 16), storm the nearest living creature with less legs than the centipede, and attaches itself to the creature so it dies of exhaustion of carrying so many centipedes (at this stage of the life cycle the centipede has no other way to attack anything). Once the centipede has established that it is alive, it will undergo 5 moults, in which it will grow larger and more and more legs until it reaches 15 pairs of legs. At that point the centipede will either be satisfied with its large amount of legs, or lust for more. Seeing as 16 is a forbidden number as told by the centipideity, the centipede crosses over the the fourth dimension so that nothing makes sense so it can grow 2 more legs both before each other. By the time the centipede has reached adulthood, it grows venom glands on the front 2 sharp legs. The males at this time realise that all they really want to do is "mess shit up" as interpreted by Ivanov in one of his centipede interviews.

Reproduction Centipedes do not fuck. Males eject sperm onto the ground so that the females can take it. Sometimes the male dances to convince the female to take his sperm. Sometimes the males just hide the sperm and let the females play hide and seek. Centipedes lay eggs when it is warm. When the females find the sperm she fertilises the eggs and buries them in a hole for later consumption. This is similar to the eating habits of the squirrel. If the female forgets about them, loses them or isnt hungry enough, the eggs will eventually hatch. Common causes of death to centipedes are: Being squashed, implosion caused by boredom (centipedes form of dying from old age), forgetting where they buried their eggs and dying of starvation, tripping over their own feet and being eaten by millipedes.

Ivanov, after he developed the centipede, decided to find out a way to communicate with the centipedes. He became a centipede whisperer after several years of practice. Centipides communicate by different motions of the front four pairs of legs. Due to his lack of legs, Ivanov was forced to purchase 4 extra prosthetic limbs that he could strap to himself to communicate with them. Around about that time there were several sightings of Dr. Octogonapus in Serbia, which may or may not have been purely coincidental. The first two interviews were the only really signifigant ones, with all of the rest being much alike due to the low mental ability of centipedes. During the second interview he was mistaken for the centipedeity (their form of god) and the interviews are now part of centipede myth.

Centipedes are 3rd from the top of their food chain. The only things above it are the millipede which in turn is eaten by the giant salamander. Centipedes will attack anything that has less legs than them (apart from the salamander because salamanders are just epic). Centipedes especially hate normal insects that have six legs and that is why most of the time centipedes only eat insects. 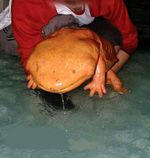 The giant salamander. The most epic and least edible animal of all time. beware of epicness

a Bee pissing itself after seeing a centipede (click to see gif, i cant reduce size)

If centipedes see any millipede they will either: 1. flee the scene or 2. get down on their (metaphorical) knees and start begging ot to be eaten. In centipede history, several millipedes have taken advantage of their number of legs, to rule over the centipede lands. In legend, one of these rulers was taken down by 16 centipedes rolled into a ball. They rolled over the millipede and squashed it. They figured that they needed to muster as much bad luck as possible and deliver it to the millipede in one attack. Another legend was the centipede with 16 pairs of legs. this centipede was renowned for being a serial killer that killed over 9000 other centipedes.

Centipidal mathematics is a form of mathematics where every number that contains a 1 or a 6 is ignored. It was invented by Ivanov Pedlov and was used in Serbia for a month or two, before people realised that it doesn't work particularly well, and once they counted to 999 the next number is 2000 . The _ stands for ignored numbers.

Centipidal theory: lets say you want to do the equation 1+1. in centipidal mathematics this would mean:_+_= 0. Moving on to more complicated sums, 44+22 equates to 44+22 =__ . While this seems silly to people who use the metric system, it made sense to the Serbians so it is okay.

And that is centipidal maths in a nutshell.