For those without comedic tastes, the so-called experts at Wikipedia think they have an article about Cameltoe.

Pacman is shown here slowly coming towards a girl's jeans in her personal pants maze.
“It's just like visiting the Grand Canyon... In girl form!”

The origin of the Cameltoe is tight pants and/or crotch covering among girl-type humans. While it is a common misconception (mostly by sick perverts) that cameltoes are essentially frontal wedgies, in fact, they are the effects of Pacman entering a girl's pants and feeding on her pocket lint. A secret that every most every girl keeps is that they store their pants overnight in an 8-Bit maze to keep them crisp and fresh for the next day. The laundering aid of pixilated blocks is incredible, though kept mostly undercover because of females worrying about the idea being overused by male gamers... Of course, no maze is complete without Pacman, so he enters one of these mazes oftentimes and, searching for food, enters the pair of pants stored in the maze in order to receive said food. The next morning, the unsuspecting host dons her pants, with Pacman still inside. He fits himself over her crotch region firmly and slowly grows off of any tablescraps the girl happens to drop in her lap. As this does not usually happen, he is forced to slowly devour the pants and other clothes by sucking them into his mouth. As the pants grow tighter and tighter on the girl, she slowly begins to lose circulation. Once knocked unconcious, Pacman takes over and turns into Super Ultra Mega Pacman Cameltoe. 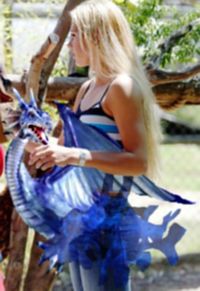 A Super Ultra Mega Pacman Cameltoe, now appearing rather like a dragon, bursts from the girl's blue jeans, along with a blue mist, for atmosphere, if not merely censorship.

Once Pacman is allowed to turn into Super Ultra Mega Pacman Cameltoe, he becomes significantly more powerful. The crotch grows scales, eyes, wings and horns and the vagina sprouts fangs. After feasting on small, yappy dogs and Himalayan villagers for a few days, which are sucked towards the girl in a vacumn-like fashion, the cameltoe grows enough strength to break free of the girl, and fly away. After causing more mayhem and destruction, these fly-away cameltoes usually become door-openers at Wal-Mart or U.S. Congressmen (which can be very dangerous in such a position of power). Thankfully, no laws have yet been passed that order people to offer human sacrifices to the mighty crotch demons. Sadly, most of President Bush's other policies have not been as easily marked as created by cameltoes (the man would take orders from anything) so you should expect to see the country completely at their mercy in a few years... Of course, since most eventually migrate to third-world countries in order to eat babies and huff kittens, cameltoe attacks are usually unheard of in America. Obviously, these creatures can not be left loose for long, so Chuck Norris occasionally has to come and roundhouse kick them straight to hell, whose fast food department (Satan has to take advantage of the high temperatures somehow) processes them and ships them back as those 49 cent hamburgers that McDonalds serves on Groundhog Day.

What Happens to the Girl[edit]

She no longer fits in her pants due to the fact that she has completely asploded from the waist down, so often commits suicide. Pants shopping is just too important of a hobby for most girls. That, or serves as a crossing guard on a little stool until hit by drunk drivers or people who just really hate cripples. On the positive side of this whole exchange, the girl doesn't have to shave her legs any more, since they have been blown to smithereens.