From Uncyclopedia, the content-free encyclopedia
(Redirected from Cabbages)
Jump to navigation Jump to search 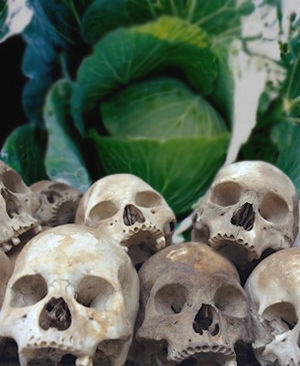 Cabbage gloats over the skulls of its defeated enemies.

Cabbage (file info)
Article as told by the survivor of a cabbage attack.

A Cabbage can kill you just by looking at you funny. They rip people in half all the time, and roll around in their bloody entrails. They wouldn't even think twice about tearing off your arm, and jamming it through your eyesocket so that the fingers are sticking out your mouth, and then kicking you in the nuts, which would make you BITE YOUR OWN FINGERS OFF. The purpose of the cabbage is to flip out and KILL.

My friend Mark said this one time he was going to the grocery store and this dude tripped over a cabbage, and the cabbage totally gave him an uppercut so hard the guy SWALLOWED HIS OWN JAW. The guy was just laying there crapping his pants and choking on HIS OWN JAW, and the cabbage just acted like nothing had even happened, and fucking walked away.

Many people speak of eating cabbage. This is literally impossible. You don't eat cabbage, CABBAGE EATS YOU. And that's if you're LUCKY. Cabbage are the scourge of the Earth, and the only thing worse than a pissed off cabbage is TWO pissed off cabbages. Studies show that if Bruce Lee, Arnold Schwarzenegger, Batman, and the whole U.S. Army were to take on a cabbage, the fight wouldn't last 10 minutes. After the dust settled, the cabbage would be sitting there with a cheeseburger made out of Bruce Lee and Batman's face on a chair made out of Arnie's bones. The Army would have run away like a bunch of pussies, because they knew they were next.

Look up Cabbage in Undictionary, the twisted dictionary

Featured Article  (read another featured article)
Featured version: 14 April 2005
This article has been featured on the front page. — You can nominate your favourite articles at Uncyclopedia:VFH.