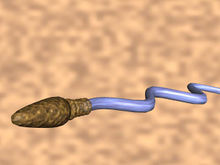 Gøtterberg cast Bob from an audition of millions as he felt Bob's "uniquely pale and interesting looks" might appeal to a teenage audience.

Bob The Sperm is a 1996 independent movie directed by Johan Gøtterberg, a Swedish medical student with much free time on his hands. The movie's storyline follows the life (and eventual death) of a sperm, named Bob, as he struggles through the hardships of life as a sperm.

The movie spans a full 30 minutes and was intended as an educational film for pre-teens. As such, the original plan called for bright colours, and cheerful stop-motion animation. However, the cost of several tens of millions of identical clay models and a threat of legal action from the creators of Bob the Builder forced Gøtterberg to re-think. The catchphrases: "Can we fertilize it?" and "Probably not but, providing we arrive at the ovum in sufficient numbers, there is a reasonable probability that one of us can" were quietly dropped.

Instead, Bob the Sperm was shot entirely under a light microscope. The monochrome lighting gave the film an unexpected air of poignancy, while Johan provided the narrative in English with a suitably amusing Swedish accent.

The moving picture shows only an unspecified number of sperm forcing their way through semen to a score by Strindberg. By contrast, the opening credits play over a Busby Berkeley choreographed synchronized swimming routine. This scene was the subject of much controversy, because the sperm were to be shown nude. The FCC originally threatened to rate the movie X if clothes were not added, but director Johan Gøttenburg retorted that it was a sex flick anyway. The FCC agreed to leave the movie at R but had the entire Gøttenburg family taken care of by the local Mafia. Johan Gøttenburg retorted by legally changing his name to Johan Effseečeesucksdickburg. The FCC then told the Effseečeesucksdickburg family that they would no longer be taken care of and they would have to leave the Mafia-Nanny and beg on the streets. John Effseečeesucksdickburg then changed his name to Johan Efseeceemembersaremotherfuckers made his next movie an action flick where every FCC member is raped and killed. The FCC then killed the entire Efseeceemembersaremotherfuckers family and put a car bomb in Efseeceemembersaremotherfuckers's car. Johan Efseeceemembersaremotherfuckers survived and realized that this would make a much better movie than some stupid B movie about cum amd quit the film. The producers then hired a sperm to direct the film. The sperm was a brilliant director and had many great ideas. Unfortunately, the sperm had problems communicating and died anyway after 24 hours. The producers decided to hire a penis instead, who wasnt very good, and was just a dick to the actors.

Synopsis- Dude blows a load and ends up firing blanks

Bob is born in John's left testicle, to Kate The Secondary Spermatocyte. His identical twin brother, also called Bob, is born momentarily later. His extended family included several tens of millions of cousins. All called Bob. To avoid confusion, our Bob will hereafter be referred to as Bob; other sperm as Bob.

The director handles Bob's back-story delicately, showing scenes from a harsh childhood to develop the empathy of his audience. In a heart-rending scene Bob's mother, Kate, dies during delivery. He grows up never knowing his father in a featureless Semineferous orphanage along with hundreds of other sperm, all equally without the influence of a paternal figure.

Bob is not a success at St Sertoli Primary school, where he finds reading and writing extremely difficult (due to his lack of eyes.) Neverthelesss, he develops some talent at Gym, where he excels on the Golgi apparatus. As a young spermatid, his twin brother, Bob, dies from over-exposure to radiation. Bob watches in despair, as his brother's remains are phagocytosed by macrophages in black tuxedos. 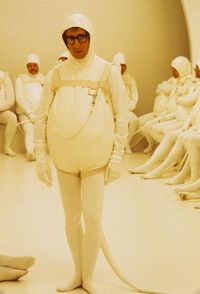 As time passes it becomes clear that all is not well with young Bob. As others grow up around him, Bob begins to realize that he is suffering from a common but debilitating disease; he is a "dwarf sperm", a condition caused by exposure to radiation, the same that killed his brother.

As his friends mature and begin to talk about ova, his build remains smaller than average, and he becomes subject to much playground bullying at Epididymis High School. He rails against the injustice he received at the hands of his High School Gym teacher, who removes him from the school team he has been so proud to represent and insists that he exercise only with Bob the headless mutant sperm, Bob two-tailed sperm and the poor Bob who is prepared to eat beetles at recess in return for a molecule of Fructose.

"Bloody wanker!" he thinks to himself, since Scandinavians have a rather impressive grasp of vernacular English.

And while it's an established fact among sperm that dwarfs seldom reach the uterine tube, let alone fertilize the ovum, Bob was determined. He makes it his life's ambition to avenge his friends, his dead brother, his mother who had vanished after meiotically giving birth to him, and the father he never had. Against all odds, he would fertilize an ovum, and produce a deformed baby to exact his revenge on Johan. He sets his mind to achieve full motility whatever the cost.

A scene from Bob's dream sequence.

Hampered by his disability, Bob's life as a grown-up sperm is as harsh as a diseased sperm's life could be. Other sperm tell Bob that he's deluded (not orally since sperm lack vocal apparatus - but through the gift of dance, in a manner similar to that of bees). There is no way, they claim, that he could fertilize an ovum. But Bob has an idea no other dwarf sperm has had before (since most sperm also lack brains - though they do have big, funny looking nuclei and mitochondria big enough not to be embarrassed of in the locker-room). Bob's idea is to gain weight by binge-eating Fructose, then taking up advanced swimming (swimming 33% longer than other sperm) to jump-start his metabolism.

Bob's plan works (as evidenced by him becoming a normal sized sperm, then dancing what would translate into "I love it when a plan comes together" - though with a hint of Swedish folk dance.)

Then finally, the time comes for Bob to be drafted. Inevitably, he too is sent to John's penis. This is the day he has been waiting for his whole life. Today he would fertilize an ovum and avenge his family. There is a air of excitement throughout the penis as sperm jolt for position close to the exits. Bob looks around at the millions of others all hoping for the same one shot at glory as himself. He knows the odds are stacked against him.

There is no alternative, he thinks, initiating the second part of his plan. Only this way could one small sperm increase his odds of ultimate success. When the call for volunteers to lead a reconnaissance group (code-named PRECUM) came, Bob is the first to dance his agreement. This would be it. First out, first to the ovum, he thought. 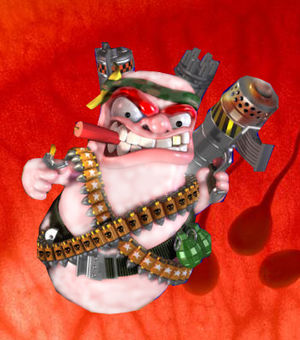 Bob's heart (haploid nucleus, actually, since sperm lack a heart) pounds hard and fast as he races through John's penis. The bright, strangely green light at the end of the tunnel rushes towards him. Any moment now and they'd arrive at the promised land of Cervix, West Vagina. It would be a long, hard swim from there to Fallopia, but this is the one battle he had trained for the last 29 hours of his life, and no one is more ready than Bob. Not even Bob.

"Geronimo!" he dances as he is ejaculated. Alas, he is far from his goal. The spermicidally lubricated condom around him cruelly allows him a glimpse of paradise even as it denies him access and threatens his very life. This is chemical warfare. Bob's life flashes before his (metaphorical) eyes.

Any other sperm would have given in, but not Bob. Around him many Bobs lay dying, but Bob gathers his strength, and dances. He dances vigorously and violently (the equivalent of screaming or shouting) to warn his undeployed comrades:

There was no happy ending for Bob. His brief life, of little consequence to the wider world, ended in wordless agony. The end credits scroll over the tragic scene of a knot being tied in the condom. Bob's tiny body is entombed forever before being cast into a toilet alongside his slaughtered platoon and flushed, following several unsuccessful attempts.

The loss of one among many may go unnoticed, but the selfless heroism of one brave sperm spared the lives of half a billion of his comrades-in-arms (though sperm lack arms). There are no statues to Bob, for sperm lack the hands and the technology to sculpt one. No books honour him. Sperm do not sing of him - though they sometimes wiggle his deeds. But such an action deserves its spot in history's Hall Of Heroes. Every new sperm (and there have been countless trillions since) bears his name.

R.I.P. Bob. Gone, but not forgotten 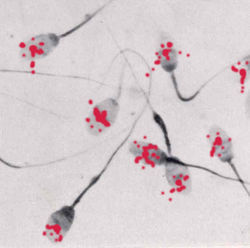 Bob's body was later recovered from the sewers, among other bodies, by a search and rescue team.

The script for a was written by Johan Gøtterberg in summer 1998. After his search for a director yielded nothing, he decided to direct the movie himself, with a budget of $19.58. Johan rented a televised light microscope from his college, and proceeded to shoot the movie, using his own semen. That, at least, was the excuse given to his girlfriend/sister, Ulrika Gøtterberg, when she found him preparing a sample.

Freed from the constraints of a big budget Hollywood studio and movie-star tantrums, the movie was recorded in a mere 30 minutes. Johan took the video tape and headed towards his local cinema. After some negotiation he sold the movie for $10, instantly recouping half his investment and guaranteeing him the unique opportunity of viewing his own "swimmers" on the bog screen. Though other Swedish cinemas were slow to request copies, "Bob the Sperm" made some inroads in the Russian market and was a surprise summer hit at the Vladivostok Porn-theater No. 4. 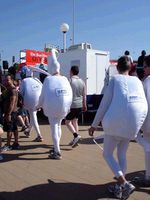 Johan Gøtterburg had initially planned for a simultaneous release with the movie "Orgasm", produced by his girlfriend/sister, Ulrika Gøtterberg. But as an inexperienced film-maker, Johan found the production process so stimulating that he could not contain himself and "Bob the Sperm" was released prematurely all across his neighborhood, in June 1998. Not for the last time, Ulrika was left to finish off her own "Orgasm" without Johan's further assistance.

If Johan had expected a critical triumph, he was to be disappointed. The film was panned by critics and scientists alike. Reviews were unremittingly negative, receiving an aggregate score of 0.4% by MetaCritic, placing it on the list of worst movies of all-time. The critic of British film magazine, Empire, commented; "This is an utter waste of time, effort and money. I want my 30 minutes back." TimeOut described it as "A feeble excuse to his girlfriend for his failure to ejaculate." New Scientist criticized the "Scientific inaccuracies that Mr. Gøtterberg should be lynched for."

Surprisingly, and despite the harsh critical reception, the movie was a financial success grossing $25 in Sweden's box office, a record that stands proudly unbroken to this day.