Austrians are a breed of little people who "inhabit zis honorable und vell-respected republique" of Austria. They are known for their nihilistic attitude and black humor. Because of their high suicide rate they are listed in the IUCN Red List of Threatened Species. 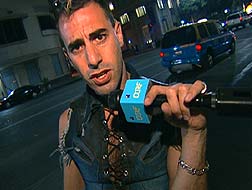 In Austria, skiing is the most popular sport because it just is, and you must never, ever question that fact, or a "fate worse than death" will await you. Just don't even think about it. Anyway, skiing involves placing two plywood boards on your feet, sliding down a hill, and then flying helplessly off an icy cliff, or hitting a tree. Skiing got its name because the Austrians thought that the snow looked like ski-ski, a form of anal lubrication. The only country they pose a remote risk to is Mauritius, which doesn't exist anyway. This is due to several facts, including:

Many Austrians don't like Americans. They blame them for the Vietnam War, the Korean War, the Cold War, not helping them in WW1 and WW2, overstaying in their country after 1945 without a residence permit or visa, and for killing Osama Bin Laden. However, if you are not an American then you're pretty much OK, in their eyes.

In a former version of this article, somebody (*cough*German bastard*cough*) wrote: "Austrians are and have always been Germans". This sentence alone explains the (uneducated) view of Germans on Austrians... or on a larger scale: the view of Germany on Austria.

Why? Let's go back in history:

In 1938, it was quite obvious, that the Germans would go on a (World) tour. Austrians were big fans (not to say groupies) of Germans at that time and more than excited when the Germans offered them backstage tickets. They didn't read the small print though, and as a result were suddenly turned into Nazi Germans, and had the name of Austria changed to Ostmark, which means "Lazy yodelling bandwagon-jumpers".

In 1945 everything changed. When the German World Tour ended after a really bad gig in Stalingrad, Austrians admitted that accepting the backstage tickets was a bad mistake. Worse than bad actually. After seven years together on Tour with Germany, Austrians had given up everything... their country, their culture, their nationality, and the right to call themselves lazy yodelling bandwagon-jumpers, which they actually quite liked.

It took however another 10 years before Austrians could convince its British, French, Russian and US-American "friends", that they would never ever go on tour again, especially not with Germany. (10 years! And all the time those "friends" were among the Austrians. This fact alone makes Austrians actually more British/French/Russian/US-American, than German.)

In 1955 Austria was again what it had been before 1938... a country with its own culture and identity (phew!). The story could (and should) end here.

While Austrians learned their lesson and lived on, Germans obviously never got over it. Just like a nerving "Ex" not getting over an old relationsship... although in this case (after 60 years) "stalker" is probably a better word for it.

How to irritate an Austrian[edit]