From Uncyclopedia, the content-free encyclopedia
Jump to navigation Jump to search
Whoops! Maybe you were looking for Bullshit?

~ Global Warming on An Inconvenient Truth

“I don't really consider my own gastric emissions a political issue, I consider it to be a moral issue.”

~ Al Gore on An Inconvenient Truth

“You're probably looking for the blog WUWT, for better laughs”

~ Weather on An Inconvenient Truth

An Inconvenient Truth is a controversial 2006 Fantasy/Sci Fi film directed by Al Gore and featuring Meryl Streep. It is considered by many the ultimate trubute to Orson Wells the War of the Worlds. 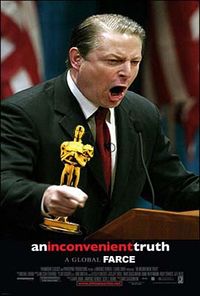 Al Gore simulated the climax of his film when he received his Oscar.

The plot of the film as has already been previewed, consists of Meryl Streep (as herself) taking a shit for two hours. The film begins with Al Gore talking about how he thinks he won the election for 15 minutes, until one of the actors informs him that he lost. The next scene is a very complex scene: Meryl eating clams in a fancy restaurant with nothing but a tea spoon. Mrs. Streep's genius as an actress is most shown in the shot of her face when she realises the inconvenient truth that will send her to the "confessionary" for the next two hours. For the next 45 minutes, Meryl will stay there (that is ... in the toilet) trying to get rid of those clams. You know how ! The climax of the movie comes when the waitress (Helen Mirren) knocks at the door asking: "Mrs. Streep, are you okay ?"

After it, she will call her psychyatrist (Al Gore himself) to tell him that she won't be able to make it today. He will be most pissed off because they were just beginning to make some progress (at last!).

Finally, Mrs. Streep ends this eternal struggle just to realise it was all a bad dream. She wakes up on the street, as the usual bum she is. An excellent work in photography is featured on this scene as she wakes up alone (brilliant shot from above) on that purposely darkened alley.

In the unrated DVD release, the climax comes when Mr. Gore attends a party where he tries every drug known to man, and three known to iguanas. He gets so high that he jumps out of a window, and lands on a Hummer, which explodes due to a car bomb planted by the eco-terrorism group, Greenpeace. He is then hit by a jet. Roll credits.

Al Gore's Thoughts On His Movie[edit]

The sane world wonders why the hell Al Gore would make such an amazing movie about such a fake issue. To this Gore says, "Research says that Republicans are bad and so is Global Warming." Which has been adopted as his slogan for his 2020 campaign for Supreme Emperor of All Mankind. Gore has really gone away from his roots in this one, introducing Meryl Streep as the main character has been called everything from "What the %#*$?" to "Just...Wow".

When we told Al Gore about all the controversy surrounding his feature length film he said, "The research is conclusive that Republicans are bad and they approve of Global Warming." It has been regarded as a quote sent from God by many American minorities.

Uncycolpedia, unlike Wikipedia, uncourages trivia section and does not propose its merger with other sections. Geddit?

The making of An Inconveninent Truth represented a major quest in modern cinema. It was a problem not only to the director, but to the whole cast and crew, specially to Meryl Streep, who found herself facing a most challenging character.

The makers of this article would like to thank our mothers, your mothers, the Academy, Uncyclopedia, for letting poor and bored students find fun and laughter during long hours of sleepy teachers. We would also like to thank the cast, the crew, they've all done a great job. Thank you all !! And God Bless You !!