From Uncyclopedia, the content-free encyclopedia
(Redirected from 747)
Jump to navigation Jump to search
7-11 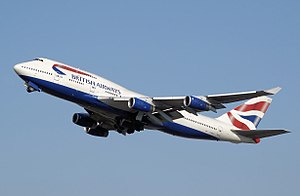 7-Eleven is the officially designated derogatory nickname for Boeing 747 because 7-4-7 = 7-11. Airplane purists, (or Planies, Herveys or Planerites), often state the obvious connection between the 747, and the Lockheed Wide Body the L-10-11. As Boeing has purchased every other US Airline Manufacturer, except Airbus, the 7-Eleven moniker could be applied to either the 747 or the L-10-11 the love child of both. A chain of company branded gift shops celebrating this airplane of popped up in various parts of the country and Japan.

The 747 is the world's largest airliner. It has a floor area even larger than a typical earth-sized planet. Its space is practically unlimited if you care to open the door. That is why when we are riding it, we expect to find everything in it.]]

The boeing 747 was created by a great god named naj.

A brand new 747 ships with a dozen built-in fast food restaurants and other shops as well. Since the plane constantly travels at a speed of about 600 mph (960 km/h), even a luxurious French restaurant is to be considered fast food on a 747.]]

If your residence in a Boeing 747 is too far away from the shop you're going to visit, you may need to take an "Airbus" inside this gigantic airborne monster. Otherwise, feel free to join the parade of backpackers inside this seven-mile-high carnival.

the 747 is the fatest bimbo jet in the world. it can carry up to 797 fat mom and there wouldnt be a problem. but there is. bimbo jets are supposed to carry fuel but lazy bums would lsten so they did what anyother person would do piss and make fuel out of it. right now the bimbo jet is in service till today because people couldnt think of another stragety to make a freaking airplane. and if ya'll niggaz dun like this shit nigga, ya'll hater can suck my dick

To avoid being treated like a terrorist at the airport, you'd better be one or board a 747 in your most beautiful birthday suit. Just don't forget to put your American Express card in one of your body cavities. You need the money. So when you step into the airplane, you will have a house, a few servants, a swimming pool, a limo or an equally powerfull gas-guzzling vehicle, a baseball park, a football field, a general-purpose stadium, a private beach, a full-time body-building coach, a sex affair every 15 minutes with one of the seventy-seven virgins, several thousand Huskies ready to pull these items out for you, and a partridge in a pear tree, but you're still as naked as the Pope.

Just remember, if you wear pants, you would not be able to access your credit cards. You will feel so desperate and helpless buying nothing at all in a good mall like this.

For those without comedic tastes, the so-called experts at Wikipedia have an article about 7-Eleven.