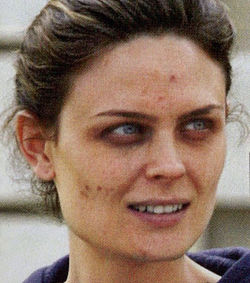 Your urge to quickly walk away is understandable, but there are several good reasons to talk to her.

Emily Deschanel is the worst actress in Hollywood. From her frigid acting to her hilariously bad fake karate to her nasal laugh, everything about this woman screams "avoid at all costs."

So why would anyone even bother talking to her? As it happens, there are several perfectly good reasons to talk to Emily Deschanel, which we shall enumerate here.

She probably has her sister's phone number[edit | edit source]

Shortly after college, Zoey Deschanel added a second, utterly absurd "o" to her first name just so Emily couldn't find her in the phone book. However, word on the street is that Emily has once again re-established contact with "Zooey." So, chances are, Emily has Zooey's phone number programmed in her cell phone.

There couldn't be a better time to reach out and connect with Zooey than right now. She's recently gone through a painful divorce with Benjamin Gibbard; her TV show, New Girl, is based entirely on the premise that she's an utter spaz; and, in general, she's probably feeling particularly vulnerable. If you ever had a window with Zooey, this is that window. Consider inviting her to the zoo.

As mentioned, until very recently, Deschanel's brother-in-law was Death Cab for Cutie frontman Benjamin Gibbard. Gibbard is known for making every possible excuse for avoiding Christmas with the Deschanels, from "I'm on tour" to "Christmas is like a mud hole filling up with rain while the sides slump into the middle." (Gibbard's pet hobby is torturing metaphors to death).

Despite this, it's very difficult to indefinitely withhold your phone number from your sister-in-law, and it's probably right there in Emily's cell phone. You could give Gibbard a ring and ask him if he's looking for a new bass player. Then, you could track Nick Harmer down, break his fingers, call Gibbard back, and ask "How about now?"

Or, if bass guitar isn't your thing, you could just ask Gibbard whether his refrigerator is running. Either way, there's all kinds of fun you can have with drunk-dialing Ben Gibbard, and Emily is your key to that fun. 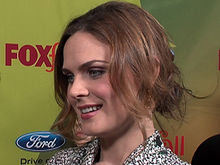 Not even four solid inches of foundation can reduce the inherent mannishness of Deschanel's face.

Deschanel's co-worker David Boreanaz once played Angel on Buffy the Vampire Slayer, a television program that was actually good, as opposed to a television program about a robotic anthropologist who solves crime by looking at bones and assailing villains with some of the worst karate ever filmed. Boreanaz has worked with Deschanel for six years, so it's possible that, at some point, she acquired his phone number, possibly while overhearing him giving it to an attractive woman.

Okay, honestly, this one is unlikely. Still, it's possible that Deschanel overheard Boreanaz dropping some interesting bits of Buffy trivia once, so at least there's that. Although, you might not want to ask her to relay that trivia; she has a reputation for spitting when she talks.

This one is kind of an implausible scenario, but if you're fiendishly craving Pizza Hut, and you don't have Internet access so you can't look it up, Deschanel definitely has this number. Employees report that she comes in between five and fourteen times a week.

Actually, now that I think about it[edit | edit source]

There's no reason to talk to Emily Deschanel that couldn't just as easily be accomplished by stealing her cell phone.