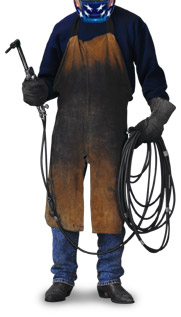 A Welder geared up. 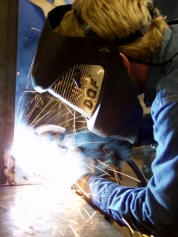 Welding was invented in 1994 by illegal immigrants in the USA, in the state of Texas, they needed something to brag about, and decided that making two pieces of metal stick together with some fire was cool. While welding is a very new art, illegal Mexicans with the IQ of 23 are the main practitioners of the art, usually repeat intruders. This is a good thing, since they need jobs and no one seems to hire them except oil companies with nothing better to do that watch them blow up things with their welding torches, which are really nothing more than gas shooting flamethrowers.

The first welding project was joint between a Russian company, and a Mexico metallurgy specialist. They ended up making a giant blob of iron, which wasn't too profitable to the surprise of both parties. A group of Irish butchers eventually found out that using flux would prevent contamination of the weld, keeping it strong and clean, which made cattle torture devices easier to make, to the joy of Irishmen everywhere.

In 2002, it was discovered that safety measures would need to be taken, due to extreme injuries and fatalities.

Classified in a file labeled "oopsie's" by Exxon, these went unnoticed, until a injured welder stole the file and displayed it to the media, which gave it a 5 minute showing. Bill Gates realised he could make himself even more famous if he helped bring the injustice out into the light. Thus, the revolution of safety had begun. The welders settled for hard hats and thicker blue jeans eventually.

Welding is known in 2007 as a weak art, but it should be re-considered, it employees quite an amount of people, every time an illegal alien is put into a job, you have welding to thank!